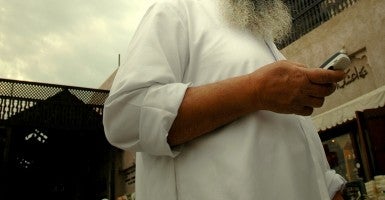 In a bizarre case of medieval barbarism fusing with 21st century technology and a dash of capitalism, the terrorist group Islamic State, which is rampaging across Syria and Iraq, has taken to the Internet with a new level of sophistication.

In Iraq, the government shut down Twitter and Facebook only to find terrorists are now selling apps on Google Play to connect with followers. This creates a challenge not only for governments but for Internet companies whose websites and products are being deployed for terrorist recruitment and propaganda.

Islamic State, also known as the Islamic Front, uses social media to spread terror with graphic depictions of murders and boasts of its territorial gains. Islamic State now has moved into the app business with applications that allow it to post propaganda directly to users and circumvent government controls of the Internet.

Its product, The Dawn of Glad Tidings, abbreviated to Dawn, was sold through Google Play and has been used to circulate more than 40,000 messages in recent days. The website even features a line of products, including T-shirts with revolutionary messages.

Islamic State also uses social media to recruit both men and women from the West. According to Jamie Dettmer writing in The Daily Beast, tweets and blogs purportedly are written by young women, trying to persuade “sisters” to travel to the Middle East to marry terrorists and be mothers of future terrorists in the name of the Caliphate.

Writes one tweeter, “Women are not equal to men. It can never be. Men are the leaders & women are [so] special that Allah has given them [an] entire chapter in the Qur’an.” It is hard to imagine 21st century Westernized girls could be susceptible to this message, yet some have been.

Governments that respect freedom of speech can and should do only so much. The State Department’s Center for Strategic Counterterrorism Communication is an example of a counter-propaganda effort that works. Yet, more proactive measure to root out this kind of dangerous content need to be deployed by technology companies themselves, who tend to pride themselves on having a social conscience, but whose products are being dangerously abused.