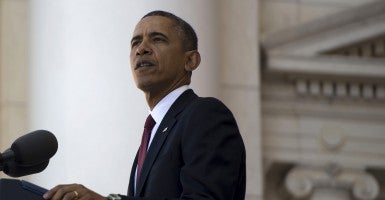 In an unprecedented letter, a majority of the federal government’s inspectors general (IGs) claim that the Obama administration is obstructing their investigations into government mismanagement and corruption. So much for President Obama’s claim that his would be the most transparent administration in history.

And it truly IS unprecedented. Rep. Darrell Issa (R-Calif.), chairman of the House Oversight and Government Reform Committee, says “there has never been a letter even with a dozen IGs complaining” about such obstruction by an administration. The fact that the Justice Department’s IG, Michael Horowitz, also signed on is particularly revealing. After all, it is the duty of senior executive officers like Eric Holder to advise subordinate officials that they are obligated to cooperate with the IGs of their agencies.

On Aug. 5, 47 of the federal government’s 73 inspectors general, many of whom were appointed by President Obama, sent their letter to Issa, Sen. Thomas Carper (D-Del.), and the ranking members of the House Oversight and Government Reform and Senate Homeland Security and Governmental Affairs Committees — essentially pleading with Congress to help the IGs do their jobs uncovering waste, mismanagement, fraud, and corruption within their respective agencies.

In the letter, the IGs complain about the “serious limitations on access to records that have recently impeded the work” of IGs at the Peace Corps, the EPA, and the Department of Justice. Administration lawyers have construed laws related to privilege in “a manner that would override the express authorization contained in the IG Act” and seriously impede the “ability [of the IGs] to conduct our work thoroughly, independently, and in a timely manner.”

According to the letter, the Justice Department withheld “essential records” in three different reviews, despite the fact that such records had been produced for the DOJ IG “in many prior reviews without objection.” Michael Horowitz eventually got access to the files, it seems, but not because Department officials realized they were misinterpreting the IG law in withholding access. No, Horowitz got the records only after DOJ leadership decided that “the three reviews were of assistance to the Department of Justice’s leadership.”

In other words, Attorney General Eric Holder and his political subordinates only gave the IG access to these records because they decided there was nothing in them that would prove embarrassing.

This is in blatant disregard of the Inspector General Act passed by Congress in 1978. As the IGs point out, Section 6 of the IG Act gives IGs access to “to all records, reports, audits, reviews, documents, papers, recommendations, or other material available” to the agency involved. Neither Eric Holder nor the head of any other federal agency has the right to withhold documents or other records relevant to an investigation from the IG for any reason unless another federal law “expressly so states,” let alone because that official thinks such records might reveal wrongdoing, ethical improprieties, or other embarrassing information.

A Justice Department spokesmanstated that “because the documents at issue included grand jury material, credit reports, and other information whose dissemination is restricted by law, it was necessary to identify exceptions to the laws to accommodate the inspector general’s request.” However, that is a poor excuse to stonewall or slow-walk the Inspector General’s inquiry.

Thus, any privilege doctrine — whether it be attorney-client, grand jury secrecy, or premised on some other privacy interest — does not generally prevent lawyers within DOJ from providing confidential information to the lawyers working in the IG’s office, who are also DOJ employees.

Gerald Walpin, the former IG of Americorp who was fired after he filed a report accusing a political supporter of President Obama of misusing an Americorp grant for personal use, says that he is “not surprised that this administration employs any means to thwart IGs’ performance of their important job.” He calls the privilege claim “ludicrous,” adding: “IGs are as entitled to all documents in the possession of an agency as anyone else in the agency.”

As the IGs say, “effective and independent oversight by Inspectors General” saves taxpayers money and improves the operations of the federal government. The behavior of the responsible agency heads with respect to the internal watchdogs in those agencies leaves those federal agencies “insulated from scrutiny and unacceptably vulnerable to mismanagement and misconduct.”

Congress and the American people should be extremely concerned by the behavior of the administration and the serious charges made by almost four dozen IGs whose responsibilities range across the entire spectrum of the federal government, from the Justice Department to the Environmental Protection Agency to the National Security Agency. The only thing more dangerous than an administration that abuses its power is an administration that tries to hide what it is doing from taxpayers, voters, and our elected representatives in Congress.

This article was originally published on Town Hall.