The Obama Administration Has Little to Tout About Obamacare 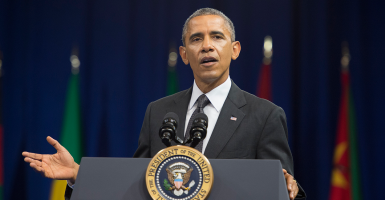 There has not exactly been an overabundance of good news on Obamacare. So it did come as some surprise two weeks ago when the Department of Health and Human Services issued a press release with the headline: “Consumers have saved a total of $9 billion on premiums,” and the subheading; “Health care law will return to families an average refund of $80 each this year.”

There is nothing unusual or even untoward about the Obama administration doing what it can to put a positive spin on the law. But what makes this item interesting is it reveals how little the administration actually has to tout about Obamacare and how far it must reach to manufacture a success story.

The purpose of the press release was to announce data on the effects of Obamacare’s “medical loss ratio” regulation, which “requires insurers to spend at least 80 percent of premium dollars on patient care and quality improvement activities. If insurers spend an excessive amount on profits and red tape, they owe a refund back to consumers.”

For the 2013 plan year, insurers will be required to pay $332 million in premium refunds to 6.8 million individuals. That works out to $43.78 a person, or HHS’ figure of $80 per household for 4.1 million households. In other words, HHS is crowing that Obamacare benefited 2 percent of Americans by getting them small refunds from their insurers.

And by small, we mean small. The $332 million in refunds are out of the $270 billion insurers collected last year in premiums for individual and group major medical coverage subject to the MLR. That means about a penny in refunds for every $10 of premiums.

So all the “excessive profits and red tape” insurers supposedly charged for actually amounts to one penny out of every $10 billed. One reason for that modest result is that relatively few insurers run afoul of the MLR rule. The Government Accountability Office found 76 percent of insurers already met or exceeded the MLR standards before they went into effect.

The picture appears even worse when these “savings” are compared to just one slice of Obamacare’s own “excessive red tape” costs, as my colleague, Alyene Senger, pointed out last week:

“At least two states, Oregon and Nevada, are switching to the federal exchange for 2015 open enrollment. The grants they received—$305 million and $91 million, respectively—to build their exchanges thus have been entirely squandered.”

In fact, HHS so far has spent nearly $5 billion on building state exchanges and almost $1 billion more on a federal exchange that still isn’t fully functional. By comparison, for the three years that the MLR has been in effect, total rebate payments have been $1.9 billion. As Senger observes:

“Given that the consumers who reaped $332 million in MLR ‘savings’ this year also are the taxpayers whose money HHS blew, in even greater amounts, on dysfunctional exchanges, it’s hard to see how American taxpayers are ‘winners.’”

But there’s more. How did HHS manage to inflate these modest figures into an attention-grabbing headline about MLR saving consumers “$9 billion on premiums?” Well, according to HHS:

“If insurance companies had maintained their 2011 ratios of premiums relative to the cost of medical care, consumers would likely have paid an estimated $3.8 billion in additional premiums in 2013. … Since 2011, consumers have saved an estimated $9 billion.”

The first problem with HHS’ assumption is that loss ratios—for any insurer and any type of insurance—fluctuate to some degree from one period to the next.

That is because the business of insurance consists of accepting risks in exchange for a fee (premium), which means that an insurer’s claims costs never can be predicted with the same degree of accuracy as other business expenses. Indeed, if an insurer’s loss ratio remained constant for two or three years it would be a highly unusual coincidence.

The HHS figure of $9 billion in premium savings is completely bogus.

Nor does such an assumption account for an insurer’s own actions that have short-term effect on its loss ratio, such as when an insurer discounts premiums to attract new business or increases premiums to offset prior-year losses. In fact, there is a whole body of economic literature on the “underwriting cycle”—meaning the observed tendency of insurer pricing and profitability to regularly rise and fall in response to these factors.

Thus, to get HHS’ $9 billion in phantom premium savings, one has to assume the loss ratios for all health insurers remained constant for three years—something that would be impossible to achieve, even if deliberately attempted—and then further assume that insurers just kept automatically raising premiums based on some (unspecified) rate of growth in medical costs.

Of course, neither assumption actually reflects how the real world works, which means the HHS figure of $9 billion in premium savings is completely bogus.

If there were some genuine good news about Obamacare, presumably HHS would be talking about that instead.