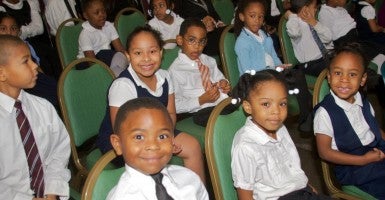 When the North Carolina Legislature approved a budget in late July that allocated more money for a new school choice program, it was the answer to one mom’s prayer.

Kena Cooper’s son, Keenan, already had received a scholarship to a private school. He was chosen in a lottery of 4,200 students for 2,400 slots in a process the mom referred to as “nerve-wracking.”

But that didn’t fulfill her prayers.

“When I checked, it said, ‘Congratulations,’ and I was like, ‘God, I thank you,’” she said. “I prayed that the other parents that didn’t get picked, that extra money would be available for them to get picked, because as passionate as I am, they are, too.” “I’m totally disappointed when it comes to the school district. I’m glad he’s my last child that will have to experience this school,” Cooper said. “It’s just sad. They are really failing the children.”

Keenan will attend Cornerstone Christian Academy this fall. Several Cornerstone students had job-shadowed with Kena Cooper at the local radio station, and she was impressed when she toured the school and spoke with the principal.

“She was telling me how each child, they go at their own pace,” she said. “They don’t rush them through. They do tutoring and everything else. They have books they can bring home; they do encourage parents to work with the child. I was like, this is what I want for him,” she said.

The last day of school, Cooper had a final meeting with the team of teachers helping with Keenan’s special education. He had just finished sixth grade, but Cooper was told he was reading at an eighth-grade level. When Cornerstone tested him, it found he was closer to a third-grade level.