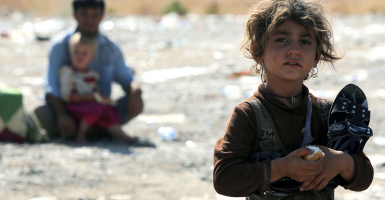 A displaced Iraqi girl from the Yezidi community holds a piece of bread Aug. 11 near the Iraqi-Syrian border. (Photo: Ahmad Al-Rubaye/AFP/Getty Images/Newscom)

Exhausted mothers. Fathers fearing for their families. Children dying of thirst and hunger. Brand new babies delivered with no medical assistance. Dehydrated elderly. These are just some of the dire circumstances the Yezidi community has faced since being forced to flee their villages for the top of Mount Sinjar, Iraq, after terrorists from the Islamic State attacked them for their religious beliefs Aug. 2. On Aug. 11, thousands of Yezidis braved the 100-degree weather and embarked across the mountain chain in hopes to find refuge in northern Iraq and Syria. Iraqi Army helicopters evacuated small groups of Yezidis and some have escaped the mountain on their own. But reports estimate as many as 70,000 people remain trapped on Mount Sinjar, and at least 100 people have died from dehydration and the heat. They’re surviving only off of bags and boxes of food, milk and diapers thrown to them from helicopters 50 feet above. Some Yezidis made it onto rescue flights. But not everyone could fit.

Meanwhile, thousands more continue on their journey to safety.