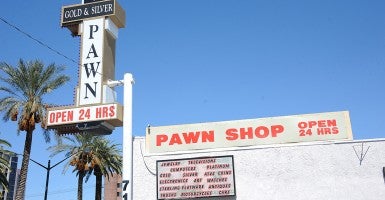 The Obama administration officials behind Operation Choke Point frown upon legal businesses such as pawn shops and gun dealers -- and let their banks know.

With no explanation, Brian Brookman last month lost the bank account for his pawn shop.

He had no idea why. Brookman says his store in Grand Haven, Mich., never had been in trouble with federal or state officials. And being in the pawn industry, he was required by law to get a city license every year.

“If there was ever a problem, they wouldn’t renew my license,” Brookman, a former police officer and Army veteran, told The Daily Signal.

After researching his case on the Internet, Brookman says he concluded that his banker, JP Morgan Chase, closed the account because two of his business activities — dealing in vintage coins and selling firearms — were labeled “high risk” by federal bureaucrats as part of an Obama administration initiative called Operation Choke Point.

Critics say Operation Choke Point, so dubbed by Department of Justice officials, seeks to weed out businesses that the White House considers objectionable.

The Justice Department contends the goal of the program is to combat unlawful mass-market consumer fraud, although recent evidence suggests otherwise.

Alden Abbott, the Rumpel senior legal fellow at The Heritage Foundation, describes how Operation Choke Point works: Banks receive notifications from federal regulators, including the Federal Deposit Insurance Corporation (the agency responsible for insuring bank deposits), that the government considers certain types of businesses “high risk.” Banks then are pressured, though the implied threat of government investigations, to sever ties with customers engaged in those enterprises.

This puts business owners such as Brookman in jeopardy of losing their livelihoods without ever being prosecuted for doing anything illegal. Abbott said:

Government officials have no authority to deny lawful industries access to credit merely because the government dislikes their line of business. That runs counter to the rule of law. Only unlawful activity merits sanction.

Though they consider themselves in peril of losing customers and coming under further government scrutiny, Brookman and three other owners of small businesses spoke with The Daily Signal about being caught up in Operation Choke Point. One is a cancer survivor,  one used to run a manufacturing company, and one is an Air Force veteran who moved back to his hometown to open a store.

Each previously came forward through the United States Consumer Coalition, a grassroots, free-market organization that encourages business owners to share their stories. Stratford’s business provides payment-processing services to a variety of client companies and law firms in the debt-relief industry. Because of Operation Choke Point, he says, it has been on the verge of collapse twice in the past year.

Stratford  says he worked in commercial real estate development after moving to Arizona to enjoy boating and desert exploration. In 2009, he  started Secure Account Services.  In the 1990s, he operated a business that manufactured rescue equipment, and had worked in the ski industry  from the late ’60s to the mid-’80s.

In spring 2013, Stratford was surprised when both Chase Bank and Horizon Community Bank closed his business  accounts, one after another. By law, his company’s funds must be held in a government-insured bank account. Without one, Stratford — whose title is director of operations — can’t do business.

“At the time these events were taking place, we were completely at a loss to explain what might have gone wrong,” recalls Stratford, who has two grown children and five grandchildren.

Doing some research, he came across information on Operation Choke Point. He then contacted the banks to ask whether government officials had exerted some “undue influence.”

A risk management representative for Chase confirmed his suspicion.

Confidentially, Stratford says, the bank employee told him Chase had sent letters to “hundreds of companies in similar industries in obedience to directions from several federal agencies, including the Office of the Comptroller of the Currency at the Department of Treasury.”

The banker told him that if his Chase branch didn’t “mitigate that risk,” all of its accounts could be audited.

“We can imagine the agony there,” Stratford says. “For what little gains they get off of a small company like ours is simply not worth their resources.”

Stratford and his seven full-time employees found another bank, but he remains uneasy about Choke Point.

“If there has been something that we were doing wrong, we would certainly like to know what that is so we could rectify that,” he says. Despite having an excellent track record, including an “A+” rating with the Better Business Bureau, Sandra Perry couldn’t find a local bank to serve her business, Cash Express.

Three different banks and two credit unions wouldn’t let her open a local account. “I was told that the money service business is too ‘high risk’ for the banks,” says Perry, a stage IV cancer survivor.

“I was told that the money service business is too ‘high risk’ for the banks.”

Perry is still searching for a bank to do business with her Mesquite location. Without one, she has to make frequent trips between Las Vegas and Mesquite, which are 80 miles apart.

Perry also worries that future regulation leaves the viability of her business in limbo. “We don’t know what’s around the corner,” she says.

Her two employees are concerned that the job security they once had is gone.

Perry, now engaged, says she is forced to push off retirement.

“I’m 72, but because of economic uncertainty caused by Choke Point, I am not planning on retiring and sipping mai tais on a sandy beach anytime soon,” she says. Brian Brookman was a police office for 10 years before joining the Army after 9/11. When he got out, he and his wife of 16 years moved to Grand Haven, Mich., to start a private security agency.

Last fall, Brookman sold his agency to open a pawn shop. On the side, he sold firearms, but decided to let that license expire in June because of “overregulation.”

In July, he opened an account for the pawn shop with a local Chase Bank, where he and his wife had been private customers for years. Two weeks later, without warning, Brookman received a letter saying the bank was closing that new account.

“The only account they closed is my business account,” Brookman says. “It was strictly targeted at my business, and the only reason they would have targeted my business is because of Choke Point.”

Chase refused to elaborate, Brookman says, but he decided they either thought he was still selling firearms or categorized him as “high risk” for buying and selling vintage coins.

“There’s just no explanation,” he says.  “It has to be Operation Choke Point.”

Brookman successfully opened a business account at another local bank. To his dismay, though, he received an email from PayPal saying the Internal Revenue Service has an issue with his account because of new regulations.

“I have heard many stories about PayPal closing accounts on gun dealers,” Brookman says. “But I’m no longer a gun dealer.” Marc Cohen has been a Second Amendment supporter for years. After a four-year hitch in the Air Force beginning in 1970, he moved back to his home in Cape Cod to open Powderhorn Outfitters, a sporting goods store that sells guns and outdoors equipment.

Eleven years ago, he lost his wife to cancer. He remarried five years ago, Cohen says, after he  “got lucky and found somebody else.”

Three months ago, Cohen had a rude introduction to Operation Choke Point. After approaching TD Bank for a new line of credit, he was rejected because of his involvement in the firearms industry.

Cohen says his bank manager of more than 20 years told him: “I’m very sorry to say this – I’m very embarrassed – but the bank won’t lend you money because you sell guns.”

Cohen’s TD Bank manager told him: “The bank won’t lend you money because you sell guns.”

Cohen was stupefied. “My credit and history are 100 percent,” he says.

When he came across Operation Choke Point on the Internet, Cohen was outraged.

He had bills to pay and six employees to support. “I depended on this,” he says.

Three weeks later, Cohen was able to find a bank that he says “would accept a second-class citizen.”

Now, he speaks out against the government operation.

“I can’t take on a Department of Justice and the Federal Deposit Insurance Corporation,” Cohen  says. “I’d love to, but I can’t.”

Instead, he’s sharing his story, which he says has resulted in more than 600 of his Powderhorn customers leaving TD bank.

“They were livid,” Cohen says. “I had one young lady call me up and say, ‘I just closed my account from TD bank and I stood back about 10 feet away from the counter and announced to the whole bank why I was closing my account.’ ”

What does he think of the Obama administration’s actions?

“Choke Point is an affront to the American way of life.”

“I think Choke Point is an affront to the American way of life,” he says, “and I’m very disappointed in our government for doing this to us.”