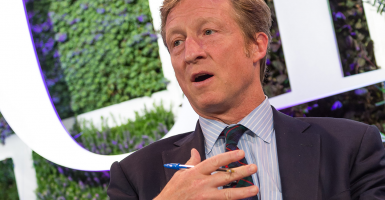 Democrat billionaire Tom Steyer has donated more than $20 million to candidates and outside groups to influence this year’s election, making him the top individual contributor in 2014. And that’s just a fraction of the $50 million Steyer has said he’s willing to spend.

The San Francisco-based environmental activist built his fortune through the Farallon Capital hedge fund he founded in 1986. As he was amassing his warchest, Steyer enjoyed close ties to the Democratic Party and one particular influential Californian: Nancy Pelosi.

Pelosi, the former House speaker who currently serves as Democratic leader, has used her Washington perch to boost some of Steyer’s projects with government aid.

In total, Steyer has benefited from more than $1 billion in taxpayer money. According to her own press releases, Pelosi is responsible for a share of that total.

An outspoken opponent of the Keystone XL Pipeline, Steyer is now using his fortune to spend “upwards of $50 million to back select Democrats” in this year’s elections, according to a profile in Forbes. Since 1990, Steyer and his family members have given more than $1.1 million in political donations to Democrats, according to the Center for Responsive Politics.

Last October, Steyer sold his stake in the hedge fund and announced he would step away from a position at Farrallon to devote his full attention to politics.

“I think I’m going to be focused on how to, is there a way to move the needle in some way having to do with thought or policy,” he said in an interview with Reuters. “And I don’t know what shape that’s going to take.”

Steyer claims his political contributions have no relationship with his business.

“What we are doing is we are trying to stand up for ideas and principles that we think are incredibly important but have nothing to do with our income or assets,” he told The Hill.

He did not respond to an interview request from The Daily Signal.

Farallon states on its website that it invests in businesses and securities that are “undergoing change and are viewed as distressed assets.”

The deal provided Farallon with roughly 2 million square feet of commercial space in Mission Bay, a hotel near SBC Park, where the San Francisco Giants play, and residential sites in close proximity to Mission Bay Channel. Richard Fried, a managing member with Farallon, acknowledged in interviews the deal had no relationship with troubled assets in line with what the company describes on its website.

Mission Bay Development Group is responsible for building most of the infrastructure. FOCIL-MB buys, sells and leases parcels of land to developers. Seth Hamalian, who oversees FOCIL-MB, says between 2003 and 2008, more than 3,000 residential units and 1.7 million square feet of office and lab space were built. President Obama looks out as House Democratic Leader Nancy Pelosi (in red) points out toward the ocean during a Democratic fundraiser at the home of billionaire Tom Steyer in San Francisco April 3, 2013. (Photo: Kevin Lamarque/Reuters/Newscom)

Enter Pelosi, who has been on the receiving end of donations from Steyer and his family.

In October 2012, Pelosi unveiled an agreement that would provide $942 million in federal funds to establish a transportation link between Mission Bay and downtown San Francisco.  A press release described the arrangement:

Mayor Edwin M. Lee and several key officials today announced federal approval of an agreement dedicating $942.2 million in federal funds to the Central Subway Project. The agreement finalizes the financing for extending Muni Metro’s T Third Line through South of the Market, Union Square and Chinatown and is the latest in a series of rigorous federal, state and local approvals.

Pelosi, U.S. Secretary of Transportation Ray LaHood, Sen. Dianne Feinstein, D-Calif., and  Rep. Jackie Spier, D-Calif., joined with the mayor and other local officials at a ceremony held at the site of the Central Subway’s Union Square/Market Street station to announce the project.

“When the Central Subway is complete, our city will see a stronger economy, a larger workforce, decreased pollution, less congestion, and faster, safer commutes,” Pelosi said at the ceremony. “Working with partners and leaders from government, business, and the community, this project will serve as an economic engine for our city, improve and enhance our infrastructure and connect the diverse communities of San Francisco.”

This was not the first time the former House speaker stepped in on behalf of Steyer’s project.

In June 2012, Pelosi released a statement boasting about the $10 million in stimulus funds she secured for transportation infrastructure in Mission Bay’s biotech cluster and the University of California-San Francisco hospital.

“San Francisco has always led the way in infrastructure investments that grow our economy and spur prosperity for local communities,” Pelosi said in the release. “This $10 million commitment for transportation at Mission Bay builds on that record: to create jobs in our city and serve as a model for sustainable development nationwide.”

Pelosi’s history with Mission Bay goes back even further.

In 2007, she earmarked $25 million for a “project for repair and removal, as appropriate, of Piers 30-32, 35, 36, 70 (including Wharves 7 and 8), and 80 in San Francisco, California, substantially in accordance with the Port’s redevelopment plan,” according to the congressional record. Parts of this project are located next to FOCIL’s Mission Bay development.

In 2006, Pelosi also announced a $24.5 million grant to expand transportation and boost development in Mission Bay.

“The Third Street Light Rail Project is adding a vital transit connection to our city linking the often isolated southeastern neighborhoods of the city to the central business district,” Pelosi said in a press release. “…The Third Street Line will relieve congestion, reduce air pollution, provide additional connections to other public transit lines, and encourage economic development in the neighborhoods it serves, including Bayview Hunters Point and Mission Bay.”

Pelosi’s office did not respond to The Daily Signal’s request for comment.

Since 2000, Farallon has spent more than $1 million on lobbyists in Washington–half of that since 2009–to advance its interests on projects such as Mission Bay. In 2013, its FOCIL-MB lobbyists in California were fined $40,500 for their failure to register with secretary of state.

Even so, Farallon has profited.

The company began selling parts of its Mission Bay investment in 2005, starting with a $32 million deal with Shorenstein Properties. The next year, Farallon followed up by selling a $25 million parcel to Lowe Enterprises. In 2010, it sold a two-acre parcel for $23.6 million and in 2011 the FOCIL-MB sold the five and 11 blocks to BRE Properties for $41.4 million.

As of last year, Farallon continued to own two remaining developments in Mission Bay.