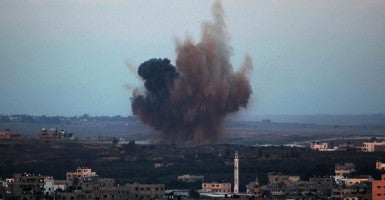 A Kent State University history professor is standing by his call for “jihad” and statement that Israel is “a regime that is the spiritual heir to Nazism.”

In an “open letter” to “academic friends of Israel,” professor Julio Pino accused the pro-Israel academic community of being “directly responsible for the murder of more than 1,400 Palestinian children, women and elderly civilians.”

Your names are scrawled on every bullet fired, bomb dropped, body buried and burnt forehead in Gaza. May your names become a curse word on the lips of every justice-loving person on earth, along with “Obama” and “Netanyahu.”

On Tuesday, the Simon Wiesenthal Center sent a letter to Kent State University, a public university that benefits from more than $137 million in state appropriations, asking that it denounce the professor:

“We urge you to condemn the recent, highly offensive and blatantly anti-Semitic remarks of Julio Pino,” the organization wrote to Kent State University President Beverly Warren.

Kent State is known for its proud legacy of Jewish studies, scholarship, and life; yet, when the state of Israel defends herself against thousands of rockets targeting Israel’s heartland launched by terrorist Hamas and a newly discovered underground of terrorist tunnels, Pino victimizes other academics with his vile propaganda, espousing terror and tarnishing Kent State’s good name while targeting Jewish and pro-Israel members of the campus community.

“Such hate speech left unchallenged will only serve to create a hostile environment for Jews and others at Kent State,” the center wrote.

The university agreed with the Wiesenthal Center, releasing a statement that said, “We condemn the professor’s statement as reprehensible and irresponsible. At Kent State, we value collegiality and mutual respect. Assailing the public with broad statements of culpability violates these principles.”

Pino said in an email that he stands by “every word of my original statement.”

The university has not said it if will take further action against Pino.

Daniel Mael is a reporter for Watchdog.org, a national network of investigative reporters covering waste, fraud and abuse in government. Watchdog.org is a project of the nonprofit Franklin Center for Government & Public Integrity.