Americans Should be Spooked by Argentina’s Fiscal Woes 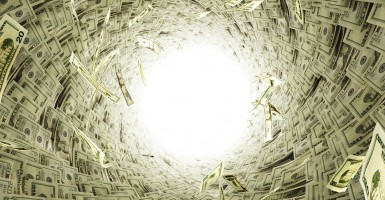 Thursday’s headline in the Los Angeles Times — “Argentina Defaults on International Debt” — spooked me, as it did investors. The stock market tanked on the news.

All Americans should feel the same apprehension. Argentina has about $200 billion in debt including billions in restructured bonds that it still can’t make payments on.

Now Argentina has to go hat in hand to its debtors to try to reach a new repayment deal. Standard and Poor’s declares that the nation is already in “technical default.” Interest rates and inflation are in double digits. The stock market collapsed 8.4 percent in one day. This is akin to a 1,000-point decline in the Dow Jones Industrial Average.

This is humiliating for a once-rich nation. Argentina’s economic minister Axel Kicillof says the nation now must negotiate with “vulture funds” to remain solvent. It’s a fiasco that was created by overspending, excessive borrowing, and the steady degrading of the currency.

Does any of this sound vaguely familiar? Our federal government has increased the national debt by more than $6 trillion over the past five years and the total debt is $17.6 trillion. I’m not a national-debt-phobiac, but these are numbers that should concern all Americans.

Is the day coming when America looks like Argentina? Will we eventually face a day of reckoning when we have to explain to the Chinese and Arabs and Japanese that we can’t make our debt payments? Probably not any time in the short term. Hopefully never.

But the parallels here are not encouraging. Argentina has printed money. Our Fed has created at least $3 trillion through QE1, QE2, and QE3. Their economy has been growing tepidly and shrank in the first quarter of 2014; we’re stuck in a 2 percent growth paradigm.

Yet no one in Washington is doing anything about it. In 20 years or so, the debt clock will be even more alarming. That’s when the baby boomers — all 75 million of them — will be collecting government checks and free heath care from Uncle Sam. The Social Security trustees just reported that the disability program is going bankrupt quite soon, as costs soar. And Social Security’s retirement program will run out of money in the years ahead.

The last financial crisis of 2008 swept in unannounced almost overnight. It was a result of over-leverage by businesses, households, and governments. The U.S. government’s balance sheet is much worse than five years ago, even as businesses and households have reduced debt. As an insurance policy against another meltdown, it would seem prudent to cut government spending, grow the economy, and lower the debt.

Instead, Mr. Obama, the congressional Democrats, and even some Republicans are pushing for even more federal spending and debt, even though we’re still borrowing one-half trillion dollars a year.

No, we are not Argentina. We are not Greece. But America has not repealed the laws of finance. Debts must be paid. When they get too high, investors panic and start selling their bonds. Our interest rates today, thankfully, are low. But if rates rise by two percentage points more than projected — which would hardly be a giant surprise — the debt rises by another $3 trillion or so over ten years. Interest payments on the debt could become the single largest expenditure in the federal budget.

Argentina is blaming its creditors — in particular, the United States — for its financial meltdown. That’s nonsense. The Argentines only have themselves to blame.

So will we, if we don’t act soon to balance the budget and grow the economy.