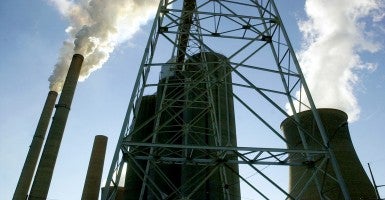 Coal country is striking back at the federal government in the latest “war on coal” battle.

The states filed the lawsuit in the D.C. Circuit Court of Appeals on Friday, accusing the EPA of “overstepping its legal boundaries” under the Clean Air Act.

>>> Infographic: Obama Is Bypassing Congress Again. This Time It’s Going to Cost You.

“This lawsuit represents another effort by our office to invalidate the EPA’s proposed rule that will have devastating effects on West Virginia’s jobs and its economy,” West Virginia Atty. Gen. Patrick Morrisey said in a statement.

The state, which heavily relies on coal, has already begun to feel the regulation’s impact. A major coal company, Alpha Natural Resources, announced last week that it might lay off 1,100 West Virginia mining employees, citing the rule as one of the reasons.

Morrisey said his office plans to use “every legal tool available” to defend coal miners and their families from the Obama Administration’s “overreach.”

“We can’t afford to see more announcements like we saw with Alpha Natural Resources,” Morrisey said.

>>> Commentary: Climate Change Is a Fact. But These New Emissions Regulations Won’t Help the Environment.

The EPA declined to comment directly on the lawsuit, but responded to Morrisey’s claim that the regulation will destroy the coal industry.

Liz Purchia, an EPA spokeswoman, asserted that the Clean Power Plan proposal gives states “enormous flexibility” in deciding how they would like to meet “pollution reduction goals,” according to the Los Angeles Times.

“The EPA is telling states there’s flexibility in this regulation, but the reality is no state is going to escape the economic pain of higher energy costs these regulations will bring,” said Loris, Heritage’s Herbert and Joyce Morgan Fellow.

The lawsuit alleges that the EPA doesn’t have the legal authority to dictate the regulations, saying that the Clean Air Act prohibits the agency from regulating coal-fired power plants using different sections of the act.

“[The lawsuit] is a positive sign that states are stepping up,” Loris said. “More states should work together to prevent the EPA from limiting Americans’ energy choices.”