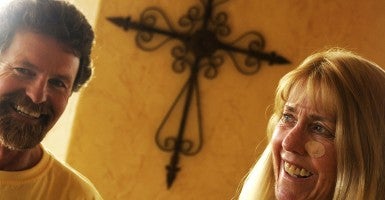 With the help of Samaritan Ministries, Mike and Mary Suitter were able to cover medical expenses. (Photo: Conklin/ZUMAPress/Newscom)

The vice president of Samaritan Ministries, which provides health coverage for more than 37,000 families nationwide, said even though his organization applauds the decision, “it doesn’t have any effect on us.”

Samaritan Ministries, and other health sharing groups like it, cater to a small-but-growing group of Americans who have chosen to opt out of the Affordable Care Act. Not only do these organizations ignore the contraception mandate, they also bypass nearly all the hallmark provisions of Obamacare.

Obamacare exemption is called the last “isle of freedom” in health care and a “miracle straight from God’s own hand.”

Dr. Andrea Miller, medical director and vice president of Christian Care Ministries, said “the biggest thing to understand” is these groups do not provide insurance. Instead, they “facilitate the direct sharing of medical cost between people of like beliefs.”

Because of this distinction, the Alliance for Health Care Sharing Ministries successfully lobbied Congress for a religious exemption in 2009. This allows medical sharing groups to provide a form of coverage but dodge the deluge of Obamacare regulations governing the insurance industry.

Lansberry calls this exemption the last “isle of freedom” in health care and a “miracle straight from God’s own hand.”

Some 300,000 Americans now find coverage under this umbrella. But first they must promise to walk the straight and narrow, and sign a strict statement of conduct.

These honor codes vary among ministries, but they generally echo a similar standard of Christian living: no drugs, no smokes, booze in moderation, and church on Sunday. Members then make monthly contributions that pay the group’s medical bills.

Proponents point to three major membership pulls: moral, charitable and fiscal. Some join to avoid funding controversial procedures and products such as abortion and emergency contraception. Others appreciate giving to help a fellow believer. But most say they do so because it makes sense financially.

By paying health care providers directly, members say they often can negotiate lower prices. Without co-pays or deductibles, some members save up to $1,000 dollars a month, according to Lansberry.

Joe Guarino of the Alliance of Health Sharing Ministries says health sharing ministries have helped reintroduce market forces to the industry. “We are a free-enterprise alternative, a consumer-driven alternative, and it works.”

Health sharing ministries aren’t without their drawbacks, however.

Guarino says members remain legally responsible for their own medical bills, and there is no guarantee anyone will “receive a check from anyone else in the ministry.”

Ministry leaders say they meet most member’s needs, and Lansberry says his group has met 100 percent of its publishable needs.

But the definition of ‘publishable’ means a great deal. Health sharing ministries regularly exclude a host of pre-existing conditions as ministries work to meet needs and limit costs.

Pre-existing conditions present “the most difficult challenge,” according to Lansberry, because his ministry seeks to provide the greatest amount of care but to “do so responsibly without putting the needs of members we already have at risk.”

“This is where Medi-Share was amazing,” he told The Daily Signal. “It was all shareable, the whole amount.” And Quiram didn’t pay a dime more than his monthly contribution to the ministry.

Quiram isn’t alone. Ministry leaders say enrollment is growing. Lansberry said his group experienced “dramatic growth” during its open-enrollment period earlier this year and is now preparing for the next round of cancellations under Obamacare.

Robert Moffit, senior fellow at The Heritage Foundation and one of the country’s foremost experts on health care policy, says these programs represent a positive reaction but not a final solution to the troubles that plague Obamacare.

He applauds “any expansion of personal freedom in health care,” but says full repeal of the “unjust and unpopular health care law” must remain the goal.

“The common good,” Moffit said, “demands an expansion of personal freedom, not an accommodation with its suffocating restrictions.”