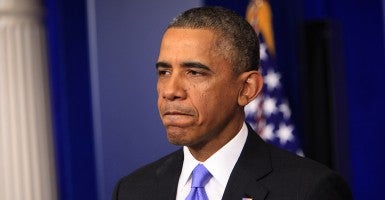 The Department of Health and Human Services recently touted $332 million in rebates owed to consumers this year because of Obamacare’s Medical Loss Ratio provision, which requires insurers to spend a large percentage of the premium dollars they receive on medical care.

But these savings are almost negligible in the grand scheme of Obamacare’s massive new spending. Consider just one of Obamacare’s lesser expenses—the grants it awarded to states to establish their exchanges.

Nearly $5 billion went to states to establish their own Obamacare exchanges. This was in addition to spending on the federal exchange, which a GAO report revealed last week is now estimated at $840 million—though it still isn’t fully built yet.

Recall what taxpayers actually got for that $5 billion. In 2014, only 15 states, including the District of Columbia, facilitated their own enrollment, with 36 states depending on the federal exchange. Many state-based exchanges experienced the same technological woes—or worse—as healthcare.org, and some still do.

Indeed, at least two states, Oregon and Nevada, are switching to the federal exchange for 2015 open enrollment. The grants they received—$305 million and $91 million, respectively—to build their exchanges thus have been entirely squandered.

Compare that to the MLR savings being touted by the administration. The MLR requires insurers in the individual and small-group markets to spend 80 percent of premiums—85 percent for insurers in the large-group market—on medical claims or quality improvements. If the insurer does not meet the proper ratio, it must refund the difference to the consumer. In 2011, insurers had to issue $1.1 billion in rebates. In 2012, insurers paid $502 million and in 2013, insurers owed $332 million worth of rebates. Over three years, rebates to individual and employer plans total nearly $2 billion.

Given that the consumers who reaped $332 million in MLR “savings” this year also are the taxpayers whose money HHS blew, in even greater amounts, on dysfunctional exchanges, it’s hard to see how American taxpayers are “winners.”

This is a good reminder that everything with Obamacare must be put into prospective. A law that is projected to spend almost $2 trillion on exchange subsidies and Medicaid expansion alone over the next decade certainly will not result in much savings for taxpayers.