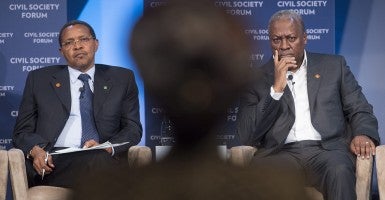 President of Tanzania Jakaya Kikwete, left, and President of Ghana John Dramani Mahama, right, listen to a question from a member of the audience during the Civil Society Forum at the US Africa Leaders Summit in Washington DC, USA, 04 August 2014 (Photo:Reynolds/Newscom).

African leaders and citizens had great expectations in 2008 that the election of President Barack Obama would elevate the prominence of Africa and its concerns in U.S. government deliberations.

These expectations have not been met.

Shortly before the 2008 election, a senior Obama campaign Africa policy adviser outlined an agenda of (1) accelerating Africa’s integration into the global economy; (2) enhancing regional peace and security; and (3) deepening democracy and accountability and reducing poverty. Although generic, these priorities are unobjectionable. The problem is that the administration has neglected Africa and done little to advance these policies aggressively, which has diluted the goodwill created with Africans by previous U.S. administrations.

The U.S.-Africa Leaders Summit, which starts today, is unfortunately poised to simply reinforce the Obama administration’s unfocused policy with few major announcements, agreements, or policy developments expected to be revealed. The summit looks to be a missed opportunity to refocus America’s Africa policy. Ultimately, the actions the U.S. takes toward building greater partnerships with African countries following the summit will be the ultimate test of Obama’s leadership and commitment to Africans. Specific steps that should be taken are:

During the upcoming summit, which marks a critical juncture of America’s engagement with Africa, peoples of the continent will be watching, reading, and listening closely to the words of the Obama administration. While the administration has proposed or expressed support for several of the above proposals, they have languished due to insufficient leadership by the administration or unwillingness to overcome resistance by his allies in Congress. Obama still has an opportunity to advance forward-looking engagement with Africa. It would be a shame if he just settled for recycled rhetoric and an expensive photo-op.

This piece was adapted from The Heritage Foundation issue brief “Setting a Course for Obama’s Rudderless Africa Policy.”