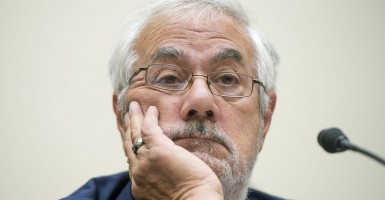 It’s one thing for President Obama to win an award for “Lie of the Year” for promising Americans “if you like your [health insurance] plan, you can keep it.” It must sting a bit more when a political ally like Barney Frank, the former congressman, flat out says the president “just lied to people.”

In an interview with Huffington Post, the veteran Massachusetts Democrat said he was “appalled” at the “bad” rollout of Obamacare last October.

“I don’t understand how the president could have sat there and not been checking on that on a weekly basis,” Frank said, then added:

But, frankly, he should never have said as much as he did, that if you like your current health care plan, you can keep it. That wasn’t true. And you shouldn’t lie to people. And they just lied to people.

Before passage and implementation of the Affordable Care Act, popularly known as Obamacare, the president repeatedly promised Americans that they would be able to keep their current insurance plans and doctors if they so chose.

But the Obamacare rollout brought cancellation notices from insurance companies to more than 10 million Americans, who learned their plans didn’t meet minimal requirements outlined in the new law.

According to several reports, the Obama administration was aware millions would lose their plans. The president’s broken “if you like your plan, you can keep it” promise earned him the dubious honor of “Lie of the Year” from the fact-checking journalism project PolitiFact.

Although Frank supports the law and voted to pass Obamacare in 2010, he said Obama should have told Americans that the plans required under the health care law would be better than their old ones:

He should have said, ‘Look, in some cases the health care plans that you’ve got are really inadequate, and in your own interests, we’re going to change them.’ But that’s not what he said.