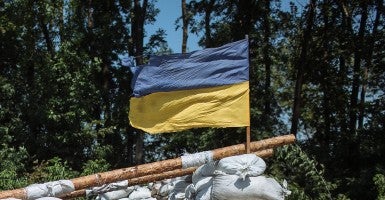 What’s at stake in Ukraine? If the actions of Western governments speak louder than words, the short answer is “not much.” The full range of sanctions on Russia has not yet been imposed, and there is a widespread reluctance to embrace Ukraine too closely.

But what if our reluctance is a mistake? We could end up undoing the entire post-Cold War order in Europe.

It’s worth recalling what the promise of that order was. After decades of a divided Europe, we finally saw the continent come together “whole and free.” Not only democracy but the rule of law was established in areas formerly controlled by the Soviet Union. There was even hope that democratic values would spread to Russia itself. That hasn’t happened, but we consoled ourselves into believing that at least Russia had accepted and would not challenge the new order for the rest of Europe.

That’s obviously no longer the case. President Vladimir Putin’s forcible annexation of Crimea and his use of force to destabilize Ukraine is not just a local affair in the “former Soviet space,” but a fundamental challenge to Europe’s post-Cold War settlement. Russia’s official acceptance of the new order had been signaled in many ways over the years, from the 1994 Bucharest Memorandum endorsing Ukraine’s independence, to Moscow’s involvement in G-20 summits. But it is now crystal clear that Russia wants to contest that settlement.

This is a challenge aimed at the heart of the European Union. The EU’s contribution to the post-Cold War settlement had been to institutionalize democracy, the rule of law and other international norms as it expanded eastward. Now Mr. Putin is telling them “no farther.”

The most serious threat to Europe from Russia isn’t from tanks massing on the borders of Poland or Latvia. It’s from the overt undermining of the EU’s credibility as viable model for the European and Eurasian space. Mr. Putin is telling his people and the world that the Europeans’ model is a sham, and he’s betting that their addiction to Russian energy and business deals will force them someday to admit it.

What’s at stake is nothing less than the credibility of democratic rules-based international order for the European space. If Mr. Putin gets us to accept his reordering of the European map by force — and yes, Ukraine is part of Europe, despite not being an EU member — then not only is the legitimacy of the European order in question. So, too, are the borders between Europe and Russia. Poland and the Baltic States will live in constant fear that their NATO partners will abandon them. And Mr. Putin will do everything in his power to stoke that fear.

Some try to argue that all Mr. Putin needs is more respect. We went too far, they say, in provoking Russia, and because of that Moscow is lashing out from a position of weakness. Why not assuage Russia’s wounded pride and give them a sphere of influence to stabilize the borders between East and West?

Mr. Putin’s answer is that he’s not interested in stability but instability. He wants to keep Ukraine in a perpetual state of unrest possibly to join other “frozen conflicts” in Georgia, Moldova and Azerbaijan. His idea of a sphere of influence is to use force to bend a sovereign neighbor to his will. If we accept this as the “new normal”, whether out of impatience or a misguided sense of realism, we would be tacitly recognizing Moscow’s claims for a new order in Europe.

We have an interest in maintaining the existing order in Europe, and that includes what happens in Ukraine. The military commitment may extend only to the members of NATO, but the larger political mission is to stand for a Europe “whole and free.” Those who want to say “goodbye to all that,” because they think we live in a new era of American limitations should be reminded that an ounce of prevention is worth a pound of cure.

The Ukraine crisis is not only about Ukraine. It’s about us — and whether our over 60-year investment in a free and stable Europe is worth defending.