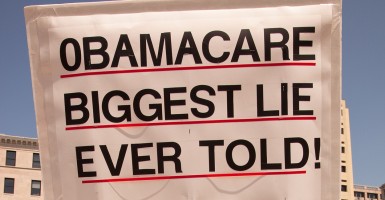 A sign from a rally at Freedom Plaza in Washington, D.C. (Photo: Jeff Malet/Newscom)

Last month’s Kaiser Health Tracking Poll found that more than half of Americans view the law unfavorably, an eight point increase from June. Only 37 percent view the law favorably while 53 percent disapprove.

This increase in disapproval may be driven by Americans reporting they hear more negative than positive things about Obamacare in ads and personal conversations. Out of the 53 percent who reported seeing political ads about the law in the past month, more than twice as many say the ads were in opposition to the law rather than in support of it.

Though a majority feels the law hasn’t directly affected them yet, more than twice as many Americans feel it has caused more harm than good for themselves and their family. The biggest grievance is the law’s increased health care and health insurance costs.

The Kaiser poll also examined the public’s feelings toward the Supreme Court’s Hobby Lobby decision. Americans are evenly divided between those who approve and disapprove of the decision. This split falls along party lines, with 47 percent disapproving.

This poll surveyed 1,507 adults and has a margin of error of plus or minus three percentage points.