Should State Funding Go to School Books or Orange Jumpsuits? 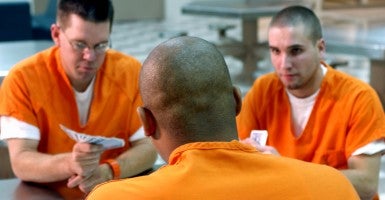 Charlyce Bozzello is a member of the Young Leaders Program at The Heritage Foundation.

Alayna Ackerman is currently a member of the Young Leaders Program at The Heritage Foundation.

Most people would agree education and public safety should be among states’ top spending priorities. But few realize we actually invest more in criminals than children.

New data shows nearly all states spend more on corrections than K-12 education—much more in some cases. New York, for instance, spent $60,076 per prison inmate but only $20,639 per pupil.

This is not a plea for more government spending on education. But it does raise the question of whether smarter spending on education could reduce the cost of incarceration and, more importantly, the number of people incarcerated. Instead of spending more of their state budgets on school books and teacher salaries than on inmates, disquieting new data shows that nearly all states are spending more of their funding on their prison population than towards K-12 education.

In a recent article published by Huffington Post, the research engine FindTheBest compiled state funding expenditures from the Vera Institute of Justice regarding the full cost of prisons to state taxpayers and data from the National Center for Education Statistics regarding full costs of K-12 education to state taxpayers. Combined, the data produces interactive maps that depict the stark financial unevenness.

Would you rather have your taxpayer dollars going to an increase in school funding per K-12 student if that helped reduce the cost imposed by poorly educated offenders thanks to the high current outflow of funding prisoners?

Perhaps each state needs a reality check on the unique benefits a sound education gives a community and a rising young adult. If taxpayer dollars went towards effectively educating our students through school choice programs and other reforms, for example, perhaps there wouldn’t be such a need to fund orange jumpsuits for high school dropouts.

Find out where your state is focusing its funding: