The Legacy of Milton Friedman: Educational Opportunity Continues to Expand 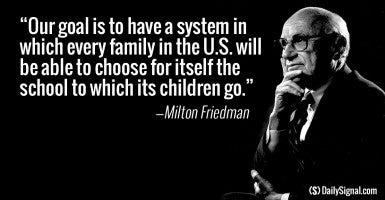 Thursday marked 102nd birthday of the late, great Nobel prize-winning economist Milton Friedman. It is both fitting and proper we remember his legacy of freedom crossed many disciplines—including education.

Milton Friedman once remarked that there are “two alternative ways of organizing an economy: top-down verses bottom-up; central planning and control versus private markets; more colloquially, socialism versus capitalism.” This is no less true with education.

Yet America has seen a half-century of growing centralization of education, without meaningful results.

Friedman knew school choice—applying market forces via parents to one of society’s most essential functions—offered the alternative. Indeed, he is widely acknowledged as the father of the school choice movement.

“A stable and democratic society is impossible without widespread acceptance of some common set of values and without a minimum degree of literacy and knowledge on the part of most citizens,” Friedman once said. “Education contributes to both.”

Friedman understood that a well-educated citizenry is essential for a free society. He also knew that an educational marketplace was better equipped to educate a free people than centralized schooling. This is why Friedman developed the idea of school vouchers, which give parents the freedom to send their child to a private school using all or part of the per-pupil public funding.

Educational choice raises all boats. It empowers families to determine the school environment that best suits the needs of their children. It puts competitive pressure on schools that fail to meet the needs of the student body, improving outcomes for both students who exercise school choice and students who remain in underperforming schools.

His goal, he said once on CNBC, was to “have a system in which every family in the U.S. will be able to choose for itself the school to which its children go.”

If Friedman were alive today, he would see America moving aggressively toward that goal. And, in 2011, Arizona enacted the nation’s first education savings account option, which could be considered a refinement of Friedman’s original voucher idea.

ESAs allow parents of eligible students to fully customize their child’s education with 90 percent of the per-pupil state funding that would have followed their child to a public school. With an ESA, parents can purchase a variety of education-related services, such as tuition, curricula, tutoring, therapies, and can even roll over unused funds into a college savings account.

Milton Friedman understood school choice as 21st century education reform that would open the door for every child to receive the best education possible. As school choice proliferates around the country, Friedman’s labor is bearing fruit— breaking down monopolies and promoting freedom in education.

In honor of Friedman’s birthday, we must rededicate ourselves to that unfinished task which remains before us, the true end of his philosophy of educational choice: educational freedom in America.