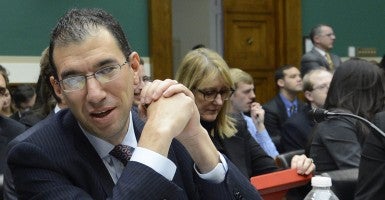 Andrew Slavitt, a former executive at the technology company tasked with “saving” HealthCare.gov and now second in command at the agency overseeing Obamacare, yesterday ran into sharp questions from a House panel about a potential conflict of interest in his new role.

Rep. Morgan Griffith, R-Va., pressed Slavitt on his previous job at OptumInsight/QSSI and that company’s continuing involvement with HealthCare.gov.

“How are you able to manage your former employer, and doesn’t this create a conflict of interest?” Griffith asked Slavitt during the new Obamacare official’s testimony before the Energy and Commerce Subcommittee on Oversight and Investigations.

Slavitt, the new principal deputy administrator at Centers for Medicare and Medicaid Services, didn’t go into specifics, but said he had limited contact with his former employer. He assured Griffith and other subcommittee members that he was taking the proper steps to maintain ethical standards and noted that he had signed an ethics pledge.

“As a public servant, I have a very clear set of rules to follow,” Slavitt said.

CMS, Slavitt’s new employer, is the federal  agency within the Department of Health and Human Services that oversees implementation of the Affordable Care Act, or Obamacare, including the website HealthCare.gov.

Slavitt, 47,  joined the Obama administration in June, leaving a job as group vice president at OptumInsight/QSSI to take the No. 2 job at CMS under Administrator Marilyn Tavenner. In 2012, he made the maximum contributions allowed by law to the Obama Victory Fund and Obama for America (now Organizing for Action).

Slavitt told lawmakers yesterday that he rid himself of any financial stakes in OptumInsight/QSSI, including stocks and investments.

OptumInsight/QSSI is the sister company of UnitedHealthcare, a health insurance company that offers plans on both the federal and state-run online insurance exchanges. Both companies are subsidiaries of UnitedHealth Group.

QSSI, which had won a contract with CMS to construct Obamacare’s federal data hub, was acquired by OptumInsight in September 2012, weeks before President Obama’s re-election.

The Obamacare agency then brought in the renamed OptumInsight/QSSI to “save” HealthCare.gov after its disastrous rollout in October 2013. The company serves as a “senior adviser” on the project.

Typically, those who leave the private sector for posts in the federal government must wait at least one year before engaging in any work involving the previous employer.

As The Daily Signal previously reported, however, Slavitt received an ethics waiver allowing him to resume work immediately on matters involving his former employer. The waiver, granted July 11 by the Department of Health and Human Services, was made public two weeks ago.

At issue for lawmakers is UnitedHealthcare’s ability to gain competitive advantage over other insurance companies because of data available to its sister company, OptumInsight/QSSI, as a result of its work on HealthCare.gov and the federal data hub.

After UnitedHealth Group acquired QSSI in 2012, HHS officials began designing a firewall to prevent the parent company from obtaining Obamacare-related data from its subsidiary. HHS, however, halted construction of the firewall.

Administration officials responsible for Obamacare have not responded to questions from Republican lawmakers on completion of the firewall. A spokesman for CMS did not answer The Daily Signal’s questions regarding the technological safeguard.

During his questioning, Griffith asked Slavitt about the firewall:

We have a situation again where there’s an appearance of a conflict or impropriety. … It would appear that the folks at QSSI who then report at UnitedHealth Group, and if that’s the case, aren’t they able then to gain information on competitors by participating in the process and in all these meetings, and get an advantage over their competitors in the health care websites?

Slavitt sought to clarify the relationship between sister companies UnitedHealthcare and OptumInsight/QSSI, but did not address the subject of the firewall.