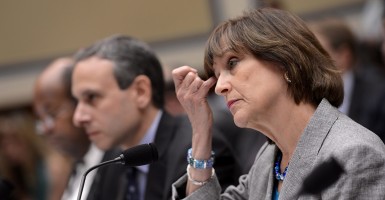 IRS division chief Lois Lerner, the central figure in the tax agency’s targeting scandal,  uses a vulgar anatomical expletive to refer to conservatives in newly released official emails and, again referring to conservatives, writes that it’s not foreign terrorists but “our own crazies that will take us down.”

The messages, Camp said, provide additional information for a criminal referral sent to the Justice Department in April. In his letter to Holder dated today, Camp writes that a “newly discovered email exchange” from Lerner’s official government email address “directly demonstrates Ms. Lerner’s deep animus toward conservatives, which she refers to as ‘a–holes.’ ”

In one of the emails, Lerner goes on to write:  “So we don’t need to worry about alien teRrorists. [sic] It’s our own crazies that will take us down. ” She suggests they will “ruin the country,” Camp said. He continues:

This new evidence clearly demonstrates why Ms. Lerner not only targeted conservatives, but denied such groups their rights to due process and equal protection under the law. This builds on the ample evidence in the committee’s original referral in which the committee found that Ms. Lerner used her position to improperly influence agency action against only conservative organizations…

>>> Lawmakers Ponder Ways to ‘Get the Politics Out of the IRS’

In a February 2012 email chain, the IRS official and an agency information technology specialist discuss a potential virus on Lerner’s home computer. In the correspondence, Lerner refers to work information kept on her home computer, but indicates that it’s not a “must” for sending back to her work laptop.

Referring to the email chain in his letter to Holder, Camp notes that Lerner stated her computer may have been hacked because of the simplicity of her password. “This exchange further raises concerns that taxpayer information may have been leaked,” the Michigan Republican writes.

The Ways and Means Committee is continuing to investigate Lerner’s role in the improper targeting of tea party and other conservative groups applying for tax-exempt status with the tax agency.

Hans von Spakovsky, senior legal fellow at The Heritage Foundation, told The Daily Signal that the newly released emails prove the targeting of conservative groups is hardly an error, as some suggest. He said:

The revelation by Chairman Camp that a newly discovered email from Lerner reveals her disdain and contempt for conservatives shatters claims by critics of the congressional investigation into the IRS scandal that the targeting of conservative organizations was just an error.

Von Spakovsky stressed the necessity of major reforms to the agency.

“Nothing is more dangerous than a powerful federal agency like the IRS abusing its authority to target individuals and organizations based on their political beliefs and ideology,” he said.

Lerner was held in contempt of Congress after twice citing her Fifth Amendment right not to incriminate herself by testifying,

In April, Camp referred her case to the Department of Justice for criminal prosecution. He specifically cited three acts that “may have violated one or more criminal statutes,” including:

Camp said the Justice Department has yet to act on the criminal eferral. In a statement on the latest email evidence, he said:

Despite the serious investigation and evidence this committee has undertaken into the IRS’s targeting of individuals for their beliefs, there is no indication that DOJ is taking this matter seriously. In light of this new information, I hope DOJ will aggressively pursue this case and finally appoint a special counsel, so the full truth can be revealed and justice served.