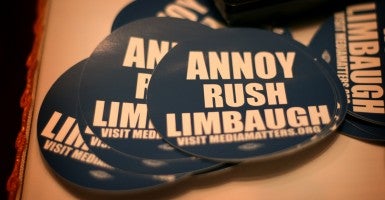 A selection of stickers on a table at a Netroots Nation conference. (Photo: Giny/Creative Commons)

The recent Netroots Nation gathering, billed as a “giant family reunion for the left,” included a directive from one leader of a progressive state policy network to “take down” conservative state policy organizations nationwide.

“The next step for us is to take down this network of institutions that are state-based in each and every one of our states,” Hasan said.

Your Heartland Institute, your Mackinac Institute and my state’s Ethan Allen Institute, although they are ultra-conservative and lead us to a set of policies that would not be passed in a state as liberal as Vermont, pitch themselves as third-party validators—‘Hey, we’re just here for research, and we want to help you figure out the best public policy.’

“It’s 2-to-1 Democratic in [Vermont’s] state Legislature … yet because we have to deal with the Ethan Allen Institute—a member of SPN—we can’t achieve our policy objectives as progressives, because they do an excellent job,” he said.

So the state that elects a socialist for U.S. senator cannot get paid sick leave passed. The state that believes, ‘Hey, we all have an obligation to each other, including in our health care,’ can’t pass a tax on soda.

The Mackinac Institute is not some small group of kooks who’ve come up with this right-wing set of theories. They are a powerful, unfortunately, well-respected group of policy writers and lobbyists who’ve radically changed this formerly bright blue, formerly very wealthy, formerly Democratic state into this sci-fi dystopia.