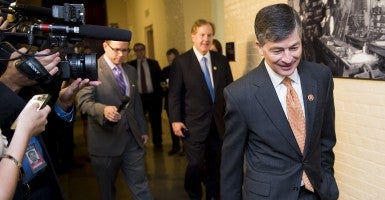 Rep. Jeb Hensarling, R-Texas, walks past reporters as he leaves the House Republican Conference meeting in the basement of the Capitol. (Photo: Newscom)

The Export-Import Bank announced today it would halt financing deals with Russia and Russian companies.

The Department of Treasury notified House Financial Services Chairman Jeb Hensarling of the decision to include Export-Import Bank financing in President Obama’s latest round of sanctions against the country.

In a statement, the Texas Republican commended Obama for his decision:

The president made the right decision. There is no justifiable reason why the Export-Import Bank should be allowed to continue financing deals that benefit Russian companies, so I’m pleased the president took this action today that I suggested.

According to The Hill, the Export-Import Bank also immediately stopped all new deals with Russia because of an “expected increased risk that retaliatory actions and other anticipated events will materially affect reasonable assurance of repayments from legal entities in the Russian federation.” Politico reported the decision “won’t affect deals for which letters of credit have already been issued.”

Hensarling, who is leading the charge against reauthorizing the bank, sent a letter to Obama last week asking why his administration was still offering “sweetheart deals to Russian companies” in light of the growing conflict in Ukraine and downing of Malaysia Airlines Flight 17.

The Obama administration hit two state-owned Russian banks — Vnesheconombank and Gazprombank — with sanctions earlier this month. The firms benefited from $497 million and $22.6 million, respectively, in financing from Ex-Im.

Neither bank was affected by the initial round of sanctions.

Obama and the European Union expanded sanctions to Russia’s energy, arms and finance sectors today. The sanctions are in response to the downing of Malaysia Airlines Flight 17, which was shot down in Eastern Ukraine by a surface-to-air missile fired by pro-Russian separatists. The administration contends Russia provided the separatists with the missile.