Export-Import Bank Goes Under the Microscope for Allegations of Fraud, Corruption 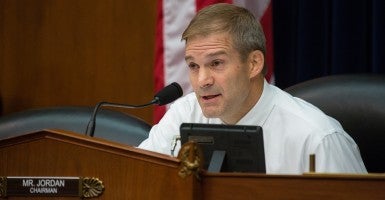 Rep. Jim Jordan, R-Ohio, is leading an investigation into allegations of wrongdoing at the Export-Import Bank. (Photo: Jeff Malet/Newscom)

Lawmakers will examine allegations of fraud and corruption at the Export-Import Bank today as a House subcommittee probes the embattled agency’s operations.

In a statement to The Daily Signal, Jordan said:

I think it is time to wind down the Export-Import Bank. I hope we can start that process this year.  It is a program that allows Washington to pick the winners and losers. Too often, big businesses and powerful special interests get their way in Washington while regular hard-working Americans get left behind.

Hopefully this hearing will shed light on the Johnny Gutierrez situation, and give Americans a better insight into how their tax dollars are once again being used to give taxpayer-funded handouts to big, well-connected corporations.

The subcommittee’s hearing comes as Congress debates the future of the Export-Import Bank, which provides taxpayer-backed loans and loan guarantees to foreign companies and countries. The 80-year-old agency’s charter expires Sept. 30, and lawmakers on Capitol Hill are considering whether the bank should be shuttered.

Ex-Im’s supporters, who include President Obama, the U.S. Chamber of Commerce and the National Association of Manufacturers, argue the bank is a boon to small businesses and helps create jobs in the United States.

Its critics, which include House Financial Services Chairman Jeb Hensarling, R-Texas, Heritage Action for America and Americans for Prosperity, say it furthers cronyism and corporate welfare.

A 2013 report from Ex-Im’s inspector general called attention to the bank’s shortcomings and characterized Ex-Im as demonstrating “weakness in governance and internal controls for business operations,” Katz noted in a column for The Daily Signal.

Last month, the Wall Street Journal reported the bank suspended or removed four officials “amid investigations into allegations of gifts and kickbacks, as well as attempts to steer federal contracts to favored companies.”

“I think it is time to wind down the Export-Import Bank,” says Rep. @Jim_Jordan.

According to the allegations, Gutierrez, who worked in the short-term trade finance division, accepted cash payments in exchange for helping a Florida-based company receive financing from the bank. He was placed on leave as the bank continues to investigate.

Gutierrez’s identity was the only one of the four employees under investigation confirmed, and Ex-Im hasn’t released any information about the investigations to the public, the Journal noted.

Gutierrez refused to appear voluntarily before the subcommittee. In response, Oversight Chairman Darrell Issa, R-California, subpoenaed the former Ex-Im official. He said in a statement:

The recently reported allegations against Mr. Gutierrez are extremely serious and shake the very core of the taxpayer-funded Ex-Im Bank. Congress needs to know exactly what occurred in this corruption scheme and will learn from both Mr. Gutierrez and Ex-Im Bank Chairman Hochberg what actions the bank is taking to ensure that the organization will eradicate this culture of corruption.

But, according to Katz, “the Journal article tells only part of the story.”

A review of government documents conducted by The Heritage Foundation found there have been more than 74 cases since 2009 in which bank officials were forced to stop transactions, cancel policies or otherwise secure funds at risk on the basis of investigations by the Office of Inspector General.

In addition, dozens of fraud cases involving those benefiting from Ex-Im financing have been referred to the Department of Justice for prosecution. Katz pointed to several examples:

[T]he bank approved 96 loan transactions in a two-year period for Gangland, USA, which purported to export electronics from Miami to South America. According to prosecutors, company owner Jose L. Quijano received more than $3.6 million in fraudulent loans from the bank.

Similarly, the bank approved 18 loans involving $13.6 million to Leopoldo Parra, who pleaded guilty in 2012 to wire fraud and conspiracy to commit money laundering. According to prosecutors, Parra and his co-conspirators fraudulently obtained the loan proceeds and used them for personal gain.

In addition, Ex-Im employees have doubts about their superiors’ ethical conduct. In a 2013 government survey, 42 percent of those working at the bank agreed with the statement, “My organization’s leaders maintain high standards of honesty and integrity.” Meanwhile, half “agreed they can disclose a suspected violation of any law, rule or regulation without fear of reprisal.”

Hensarling is leading the fight against reauthorizing the bank and convened a Financial Services hearing last month examining Ex-Im’s fate. In a statement issued last week, Hensarling praised the Oversight Committee for delving into the allegations of fraud. He said:

The allegations of kickbacks and corruption at the Export-Import Bank are as disturbing as they are serious. At our recent Financial Services Committee hearing on Ex-Im reauthorization, the bank’s chairman refused to answer repeated questions about whether he was aware of a criminal investigation into these allegations. So I’m pleased the Oversight and Government Reform Committee is taking this action.

But supporters contend the instances of fraud within Ex-Im are limited and small in the scope of the agency. Tony Fratto, former spokesman for President George W. Bush and one of the most vocal of the bank’s supporters, said last week fraud was inevitable in any instance where commercial transactions are involved. At a debate over the bank at the American Enterprise Institute, he said:

Anywhere you put money and programs and human beings together, you have the opportunity for temptation and corruption. It’s always going to be there. You can see it lots of places where you have commercial transactions.

Fratto went on to note that many trade and finance ministers abroad look to export financing to combat corruption because of the oversight official export agencies have.

The Export-Import Bank is finally coming under congressional scrutiny, and that is a very good thing because too many federal agencies operate on autopilot. In addition to shining a light on corruption and poor business practices, the hearing will likely make clear the bank must expire because it cannot be reformed.

Sen. Joe Manchin, D-West Virginia, is set to introduce a bill reauthorizing the bank for another five years.

Rep. John Campbell, R-California, also announced a potential for legislation that would reauthorize the bank with a number of reforms. A bill has yet to be introduced.

This article was updated to include additional information about the inspector general’s investigation.