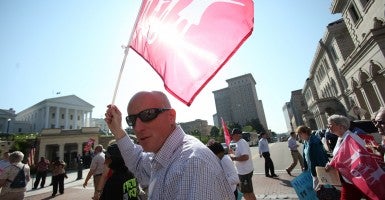 Today, in a 2-1 split decision, the 4th circuit ruled that Virginia’s marriage amendment defining marriage as the union of a man and a woman violates the 14th Amendment of the U.S. Constitution. The majority declared that Virginia’s law “impermissibly infringe[s] on its citizens’ fundamental right to marry.”

Judge Paul Niemeyer issued a strong dissent arguing that the court got it wrong, for “the majority has failed to conduct the necessary constitutional analysis.” “The fundamental right to marriage does not include a right to same-sex marriage,” Niemeyer concluded.

Today’s ruling will almost certainly be appealed. After all, the Supreme Court decisions, such as Loving v. Virginia, that established a fundamental right to marry understood marriage as the union of a man and a woman.

In issuing today’s ruling, the court implicitly supplied its own, new answer to the central question in this debate: what is marriage? The only way the 4th Circuit could reach its decision was to adopt a view of marriage that sees it as an essentially genderless institution and then declare that the Constitution requires that the States (re)define marriage in such a way.

But our Constitution is silent on what marriage is. And there are good arguments on both sides of this debate. Judges should not insert their own policy preferences about marriage and declare them to be required by the Constitution.

This is the message that Niemeyer delivered in his dissent. When it comes to treating same-sex relationships as marriages, Niemeyer explains that “there are rational reasons for not recognizing it, just as there are rational reasons for recognizing it.” And he concludes that “we, in the Third Branch, must allow the States to enact legislation on the subject in accordance with their political processes.”

This analysis is fundamentally flawed because it fails to take into account that the “marriage” that has long been recognized by the Supreme Court as a fundamental right is distinct from the newly proposed relationship of a “same-sex marriage.” And this failure is even more pronounced by the majority’s acknowledgment that same-sex marriage is a new notion that has not been recognized “for most of our country’s history.” Moreover, the majority fails to explain how this new notion became incorporated into the traditional definition of marriage except by linguistic manipulation. Thus, the majority never asks the question necessary to finding a fundamental right—whether same-sex marriage is a right that is “deeply rooted in this Nation’s history and tradition” and “implicit in the concept of ordered liberty, such that neither liberty nor justice would exist if [it was] sacrificed.”

Niemeyer is particularly helpful in seeing why the analogy to interracial marriage fails. He explains that in Loving v Virginia, the case that ended bans on interracial marriage, the couple was “asserting a right to enter into a traditional marriage of the type that has always been recognized since the beginning of the Nation—a union between one man and one woman.” He concludes:

Loving simply held that race, which is completely unrelated to the institution of marriage, could not be the basis of marital restrictions. To stretch Loving’s holding to say that the right to marry is not limited by gender and sexual orientation is to ignore the inextricable, biological link between marriage and procreation that the Supreme Court has always recognized.

If the “right to marry” includes the right to redefine marriage to include whatever consenting adult romantic relationship one most desires, Niemeyer points out where this leads: “why this broad right to marry, as the majority defines it, does not also encompass the ‘right’ of a father to marry his daughter or the ‘right’ of any person to marry multiple partners.” As I pointed out in my lecture at Stanford University, such marriage redefinition simply leads to the dissolution of marriage.

When it comes to marriage, there are competing policy arguments on the definition of marriage and in a system of limited constitutional self-government, the people and their elected representatives should be making these decisions. Last summer, when the Supreme Court struck down the federal Defense of Marriage Act (DOMA), Chief Justice John Roberts emphasized the limits of the majority’s opinion. He made clear that neither the holding nor its logic required redefining state marriage laws. The states remain free to define marriage as the union of one man and one woman.

Niemeyer explains that there are good policy reasons for citizens to refrain from redefining marriage: “Only the union of a man and a woman has the capacity to produce children and thus to carry on the species. And more importantly, only such a union creates a biological family unit that also gives rise to a traditionally stable political unit.”

Indeed, “when the Supreme Court has recognized, through the years, that the right to marry is a fundamental right, it has emphasized the procreative and social ordering aspects of traditional marriage.” He went further, arguing that “the marriage of a man and a woman thus rationally promotes a correlation between biological order and political order.”

But whatever any individual American thinks about marriage, the courts shouldn’t redefine it. Marriage policy should be worked out through the democratic process, not dictated by unelected judges. The courts should uphold the freedom of the American people and their elected representatives to make marriage policy.

Niemeyer gets the issue exactly right: “The U.S. Constitution does not, in my judgment, restrict the States’ policy choices on this issue. If given the choice, some States will surely recognize same-sex marriage and some will surely not. But that is, to be sure, the beauty of federalism.” The courts should not force states to abandon caution in the face of a social experiment like the redefinition of marriage.