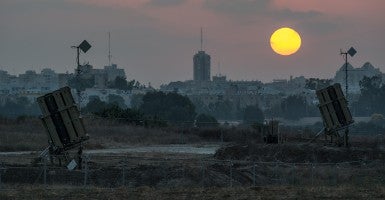 The Israeli missile-defense system known as Iron Dome once again finds itself in the international spotlight, causing many Americans to wonder if the U.S. has anything comparable. Here are a few important points about Iron Dome and missile defense in general for Americans to consider.

(1) Iron Dome is a missile-defense system that intercepts short- and medium-range ballistic missiles. The system is designed to hit only incoming missiles headed toward population centers, which, up to this point in the conflict, have been about 30 percent of the total fired by Hamas. Of those 30 percent with “good” aim, the Iron Dome system boasts a 90 percent rating. One can only imagine what the death toll might be without the Israelis’ planning and investment to build and deploy Iron Dome.

(2) U.S. taxpayers who are impressed with the system should know that they are helping to pay for it. The U.S. has contributed about $720 million for the Israeli company Rafael to develop the system. In the midst of the current conflict, the Obama administration has requested $175 million more for Iron Dome. The Israelis have asked Congress to double that number, and all four defense committees — in the Republican House and Democratic Senate — have obliged, although the Democratic-controlled Senate Appropriations Committee outdid everyone by including an immediate $225 million in the emergency spending bill that’s being considered to deal with the border crisis. The American company Raytheon has recently signed on to help develop the system, and eventually some of the Iron Dome money will go toward manufacturing here at home.

(3) Some have called this system the result of Ronald Reagan’s vision to build a missile-defense system that critics at the time dubbed “Star Wars.” This is only partially true. President Reagan envisioned a space-based system that would have the ability to intercept missiles regardless of kind and from wherever on the globe they were launched. Having this capability would render nuclear weapons almost entirely obsolete. (Check out his famous Strategic Defense Initiative speech here.) Iron Dome is an impressive feat of science and technology, but the system defends against only certain kinds of threats. It is not designed to handle the bigger missiles that Iran would launch, for example. For them, the Israelis are developing with Boeing another layer of missile defense, using the Arrow system. This system would also be very beneficial to the South Koreans, who live under the constant threat of a North Korean missile launch, which explains why Seoul is very seriously looking into acquiring the system.

(4) The U.S. does have a missile-defense system not totally unlike that of Iron Dome. They are similar in that the systems’ objectives are to deploy interceptors toward incoming missiles. Once the U.S. interceptor is launched, it identifies the warhead and collides with it, destroying it before it begins its descent. But although Iron Dome enjoys wide bipartisan support in the U.S. Congress, the same, ironically, can’t be said of the U.S. system. Indeed, we have this system only because President George W. Bush withdrew the U.S. from the Anti-Ballistic Missile (ABM) Treaty with the Russians in 2002, while many prominent Democrats (Senator Joe Biden among the loudest) complained about it.

(5) The initial deployment of what is called the Ground-based Midcourse Defense (GMD) system was meant to provide the U.S. homeland with its first defense against the massive missiles that North Korea would have to use to hit the U.S. (which Pyongyang continues to test in violation of U.N. sanctions), and the plan was to continue its development and improvement. It has made great strides; just last month it successfully intercepted a target missile, which you can watch (in amazement) here. But it’s still imperfect. We also have systems aboard Aegis ships, which can intercept smaller-sized missiles. Remember that broken satellite that was careening toward Earth in 2008? The Pentagon configured Aegis, got it in place, and intercepted the satellite before it hit our planet — not a bad demonstration of its operational capability. And we have Patriot and THAAD — both short-range systems deployed in the field and operated by the Army — to intercept short-range ballistic missiles.

(6) The current layered system of systems, like the Israeli system, is impressive; however, it has its vulnerabilities. Although U.S. military operators are confident the system could handle the kind of threats Pyongyang or Tehran could throw at us now (keeping in mind that their intercontinental-ballistic-missile programs have not yet been perfected, to our knowledge), we have only so many “bullets” to fire. Currently we have 30 interceptors in place, with 14 more scheduled for deployment in 2018. The military would shoot more than one interceptor at a missile headed toward a large city, so in the event of a major attack, we would burn through all the bullets in our chamber pretty quickly. Perhaps more alarmingly, we cannot defend against a Chinese or Russian missile assault. They have more missiles than our system can handle, and Chinese and Russian missiles have countermeasures and decoys specifically designed to fool the U.S. system.

(7) The U.S. system is limited, but not because it’s too hard to build a better one. Its limited nature has to do with policy decisions. President Obama cut the Bush missile-defense budget by more than $1.5 billion in his first year in office. Each year he has cut more and more, bringing the top line of the budget to its lowest point since the creation of the Missile Defense Agency in 2002, and he has eliminated the most promising systems that many were confident would give U.S. missile defense major boosts in capability. And let us not forget that the ill-conceived Obama–Hillary Clinton Russian “reset” resulted in cancellation of the missile-defense sites in Europe in an effort to appease Russia and slow Iran’s nuclear program, neither of which was accomplished. The lack of support for missile defense on the far left is due to an opposition to it in principle. Indeed, when Obama was a senator, he said, “I do not believe in missile defense.” Missile-defense deniers need to face the science: It works, it’s real, and to fail to give the U.S. system the resources it needs, especially while our foes work diligently on their offensive capabilities, leaves U.S. cities exposed to missile attack; and those missiles could be armed with chemical, biological, or nuclear weapons.

There is much the U.S. can learn from the Israeli conflict with Hamas. Perhaps one of the biggest lessons is the importance of understanding our enemies. We must see what their capabilities are and, while we still have time, develop the capabilities to provide ourselves with the proper defenses. Without missile defense, the only option the Israelis or Americans would have is to wait to get hit, and then retaliate.

In the words of the Gipper:

What if free people could live secure in the knowledge that their security did not rest upon the threat of instant U.S. retaliation to deter a Soviet attack, that we could intercept and destroy strategic ballistic missiles before they reached our own soil or that of our allies? I know this is a formidable technical task, one that may not be accomplished before the end of this century. . . . But isn’t it worth every investment necessary to free the world from the threat of nuclear war? We know it is.