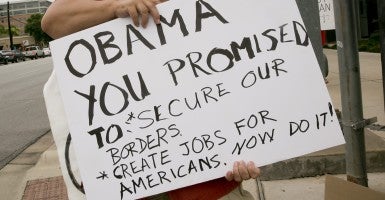 A sign from a protest in Texas. (Photo: Marjorie Kamys Cotera/Polaris)

Massachusetts Gov. Deval Patrick has answered the call to shelter immigrant children, but Cape Cod residents aren’t having it.

Last week, the Democratic governor announced his offer to house up to 1,000 children at Camp Edwards military base on Cape Cod. Concerned for the children’s wellbeing, Patrick declared, “I think we are the kind of country and the kind of Commonwealth who can step up.”

The town of Bourne disagrees.

Massachusetts wants to shelter immigrant children, but Cape Cod residents aren’t having it.

A wealthy and historic community at the mouth of Cape Cod, Bourne traditionally attracts vacationers and tourists, not refugees. Residents fear the influx of migrant children could change this forever.

On Tuesday, the town’s Board of Selectman voted unanimously to oppose the governor’s plan and draft an open letter of protest. Chairman Peter J. Meier summarized the sentiment of the board saying, “We are here to provide services, and we need to take care of our own first.”

For hours, Kurt Schwartz tried in vain to assuage the board’s fears. The state’s undersecretary of homeland security explained that the children would remain on base, away from town, and out of community schools.

Responding to claims that children were already being sent to Massachusetts, Schwartz told the board, “You are responding to rumors that have no basis in fact.”

Selectman Linda Zuern still disagreed and disapproved of the governor’s plan to move unilaterally. “I think we’ve been kept in the dark, and it’s our town,” she said, according to the Cape Cod Times.

A crowd of about 40 local citizens gathered to voice their concern. Mary Woodruff, an older Bourne resident, captured the group’s mood. “They’re adults,” she told the Boston Globe. “And they’re going to be sucking us dry. Send them back.”