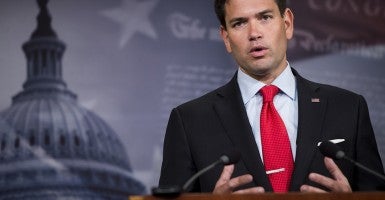 Sen.Marco Rubio, R-Florida, warned in a speech Wednesday that there was a “growing intolerance” toward those who support traditional marriage.

Speaking at the Catholic University of America, Rubio cited various instances of intolerance:

We have seen the push to remove the CEO of Mozilla because, in 2008, he made a small donation to support Proposition 8 in California, which would have upheld the traditional definition of marriage. We have seen the CEO of Starbucks tell a shareholder who supports traditional marriage that he should sell his shares and invest in some other company. And we’ve seen Chick-fil-A attacked and boycotted due to its CEO giving an honest answer to a question regarding his deeply held religious beliefs.

“I promise you,” Rubio added, “that even before this speech is over, I will be attacked as a hater, a bigot or someone who is anti-gay.”

We should acknowledge that our history is marred by discrimination against gays and lesbians. There was once a time when the federal government not only banned the hiring of gay employees, it required private contractors to identify and fire them. Some laws prohibited gays from being served in bars and restaurants. And many cities carried out law enforcement efforts targeting gay Americans.

Fortunately, we have come a long way since then.

Rubio maintained instead that the individual states have always held the authority to regulate marriage on an individual basis, and reaffirmed that “state legislatures have a right, a constitutional right to change those regulations.”

>>>The Heritage Foundation’s 2014 Index of Culture and Opportunity

This power is exclusive to state legislatures, not the judiciary, according to Rubio. He condemned those judges who would “redefine marriage from the bench” and rejected a recent Florida court decision overturning an amendment to that state’s constitution codifying a traditional definition of marriage.

The Heritage Foundation’s Ryan Anderson echoed Rubio’s call for civil debate saying that there “are reasonable people of goodwill on both sides of our marriage debate.” Anderson joined Rubio in decrying what he considers “judicial activism.”

“Marriage policy should be debated civilly and citizens have constitutional authority to pass marriage laws that reflect the truth about marriage,” said Anderson.