Do You Want Your Private Financial Information Automatically Shared with Russia or China? 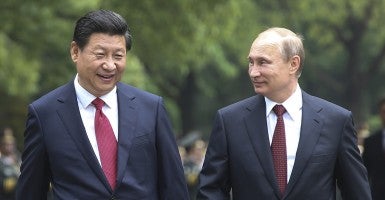 On Monday, the Organization for Economic Cooperation and Development released the full version of the global standard for automatic exchange of information.

The Standard for Automatic Exchange of Financial Account Information in Tax Matters calls on governments to obtain detailed account information from their financial institutions and exchange that information automatically with other jurisdictions on an annual basis. The standard was endorsed by G20 Finance Ministers in February 2014 and approved by the OECD Council.

It is one thing to exchange financial account information with Western countries that generally respect privacy and are allied with the United States. It is an entirely different matter to exchange sensitive financial information about American citizens or corporations with countries that do not respect Western privacy norms, have systematic problems with corruption or are antagonistic to the United States. States that fall into one of these problematic categories but are participating in the OECD automatic exchange of information initiative include Colombia, China and Russia.

The standard provides for governments to annually and automatically exchange financial account information—such as balances, interest, dividends and proceeds from sales of financial assets—that are reported to governments by financial institutions and cover accounts held by individuals and entities, including businesses, trusts and foundations. Banks, broker-dealers, investment funds and insurance companies are required to report.

The Obama administration enthusiastically supports the OECD initiative, but even the administration has realized important privacy issues at are stake. Robert B. Stack, Deputy Assistant Secretary of the Treasury for International Tax Affairs, has testified that “the United States will not enter into an information exchange agreement unless the Treasury Department and the IRS are satisfied that the foreign government has strict confidentiality protections. Specifically, prior to entering into an information exchange agreement with another jurisdiction, the Treasury Department and the IRS closely review the foreign jurisdiction’s legal framework for maintaining the confidentiality of taxpayer information.”

Leaving these determinations to a tax agency with little institutional interest in anything other than raising tax revenue is dangerous. There is little doubt sensitive financial information about American citizens and businesses can and will be used by some governments for reasons that have nothing to do with tax administration, such as identifying political opponents’ financial resources or industrial espionage. In addition, individuals in corrupt governments may use the information for criminal purposes such as identity theft, to access others’ funds or to identify potential kidnapping victims. It is naïve to think otherwise.

Automatic information exchange should be limited to law enforcement and anti-terrorist purposes and should be restricted to governments that are (1) democratic, (2) respect free markets, private property and the rule of law, (3) can be expected to always use the information in a manner consistent with the security interests of the member states and (4) have in place—in law and in practice—adequate safeguards to prevent the information from being obtained by hostile parties or used for inappropriate commercial, political or other purposes.

In February, the Senate Foreign Relations Committee held a brief hearing on a number of treaties, including the Proposed Protocol Amending The Multilateral Convention On Mutual Administrative Assistance In Tax Matters, which would implement automatic information sharing and expand the number of countries that participate beyond the OECD and the Council of Europe.

The Senate should not ratify this protocol. The risks to American citizens and American businesses are too great.