ISIS Continues to Force Christians Out of Iraq 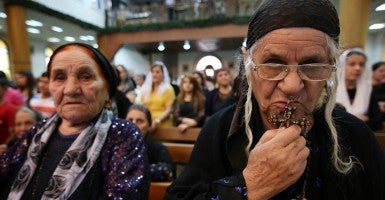 An Iraqi Christian holds a cross during a mass at the Saint-Joseph church in Arbil, the capital of the autonomous Kurdish region of northern Iraq. (Photo: AFP/Safin Hamed/Newscom)

The Islamic State in Iraq and Syria ultimatum that Christians leave Mosul to avoid purge expired Friday at noon, driving a reported 2,000 Assyrian families out of the area.

Many of these families sought refuge in Qaraqosh, a historic Christian city outside of Mosul—though according to Bloomberg Businessweek, even this “formidable” Kurdish-protected area is falling into the grips of ISIS.

The terrorist group has cut off the area’s main water supply in an effort to further drive Christians out of the region they’ve inhabited for 2,000 years.

Katherine Gorka, president of the Council on Global Security, cited a conversation with the Syrian Catholic Archbishop Yohanna Moshe, saying he had reported that ISIS is now just 2 kilometers outside of Qaraqosh, sparking grave concern of a potential Christian genocide.

“ISIS is using water as a weapon,” Gorka says. “Christians are being eradicated. ISIS’ goal is to push the Christians out of the land that they claim as the caliphate.”

Christians fled Friday with little choice under the strict ISIS demand: Leave immediately, convert to Islam or be killed. Those who fled were robbed of all possessions with the exception of the “clothing on their backs,” according to CNN.

The number of Christians in Iraq has severely dropped since the U.S. invasion in 2003, dropping from 1.5 million to 400,000 over the last ten years according to the Washington Post.

Many of the abandoned Christian homes now have “property of ISIS” scribbled in black on the walls along with a red Arabic “n” signifying the Arabic word for “Christian,” marking a blatant branding all too reminiscent of previous genocides.

ISIS has also taken control of the 30 churches and monasteries in the city, according to the Assyrian International News Agency. The group removed all crosses from the churches, converting many of them into mosques or ISIS centers. Others have been looted, destroyed or burned to the ground.

Phillips said the U.S. should work with Iraq and Turkey along with Kurdistan’s regional government to ease the Christian and minority suffering. While concerted efforts by these governments to move refugees to safe areas in Iraq and protect Christians against ISIS aggression are necessary, Phillips doesn’t see these actions as permanent solutions.

“The crisis will continue as long as the Islamic state survives to enforce its harsh and brutal version of Islamic law,” Phillips said. “The U.S. must help the Iraqi government defeat it militarily, drive a wedge between it and more moderate Sunni Iraqi rebel groups and chip away at its power in Syria by supporting rival Syrian rebel groups that already are fighting it there.”