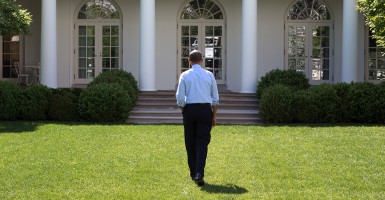 Today President Barack Obama issued an executive order barring federal contractors from what it describes as “discrimination” on the basis of sexual orientation and gender identity. Employers should respect the intrinsic dignity of all of their employees, but today’s executive order undermines our nation’s commitment to pluralism and religious liberty.

Today’s executive order does not contain any religious liberty protections—though it does retain an older federal regulation that permits religious organizations that favor employment of co-religionists to continue such practices. But there is no protection for organizations that hire based on mission—not on affiliation—to continue to do so. This in effect excludes taxpayers who hold conscientious beliefs about sexuality that run counter to Obama’s from being eligible for federal contracts funded with their own tax dollars.

Today’s order disregards the consciences and liberties of people of goodwill who happen not to share the government’s opinions about issues of sexuality. All Americans should be free to contract with the government without penalty because of their reasonable beliefs about morally contentious issues.

Federal policy on government contracts should not seek to enforce monolithic liberal secularism. Today’s order undermines our nation’s commitment to reasonable pluralism and reasonable diversity. All citizens and the groups they form should be free to exist and participate in relevant government programs according to their reasonable beliefs. The federal government should not use the tax-code and government contracting to reshape civil society on controversial moral issues that have nothing to do with the federal contract at stake. All educational institutes, for example, that meet bona fide requirements about education (not sexuality) should be eligible for federal contracts if they fulfill the federal purpose of the program—education.

Today’s order disregards the consciences and liberties of people of goodwill who happen not to share the government’s opinions about issues of sexuality.

Indeed, sexual orientation and gender identity are unclear, ambiguous terms. They can refer to voluntary behaviors as well as thoughts and inclinations, and it is reasonable for employers to make distinctions based on actions. By contrast, “race” and “sex” clearly refer to traits, and in the overwhelming majority of cases, these traits (unlike voluntary behaviors) do not affect fitness for any job.

Today’s executive order bans decisions based on moral views common to the Abrahamic faith traditions and to great thinkers from Plato to Kant as unjust discrimination. Whether by religion, reason, or experience, many people of goodwill believe that our bodies are an essential part of who we are. On this view, maleness and femaleness are not arbitrary constructs but objective ways of being human to be valued and affirmed, not rejected or altered. Thus, our sexual embodiment as male and female goes to the heart of what marriage is: a union of sexually complementary spouses. Today’s order deems such judgments irrational and unlawful.

Today’s executive order also does not contain a Bona Fide Occupational Qualification (BFOQ) exemption. BFOQs, which other employment laws contain, allow employers to make employment decisions so long as those decisions are honestly related to job qualifications. For example, Title VII of the Civil Rights Act contains a BFOQ that allows employers to take sex into account: hiring a female camp counselor at an all-girls sleep-away summer camp, for example, which might otherwise seem to be “sex discrimination.” Today’s executive order has no provision that protects organizations with jobs where one’s sexual orientation or gender identity is a bona fide occupational qualification that is reasonably connected to the mission of the organization and the responsibilities of the job.

Worst of all, today’s executive order is unnecessary. Voluntary market forces are already eliminating true discrimination, as making employment decisions based on non-relevant factors hurts one’s ability to compete. Indeed, the liberal Williams Institute at UCLA, which conducts research on sexual orientation and gender identity law and public policy, reports that most federal contractors do not consider sexuality:

But the federal government should not penalize those contractors that do conscientiously judge sexual orientation or gender identity to be relevant to their mission and purpose.

In response to this executive order, Congress has an opportunity to protect religious liberty and the rights of conscience. Policy should prohibit the government from discriminating against any individual or group, whether nonprofit or for-profit, based on their beliefs that marriage is the union of a man and woman or that sexual relations are reserved for marriage. The government should be prohibited from discriminating against such groups or individuals in tax policy, employment, licensing, accreditation, or contracting.

The Marriage and Religious Freedom Act—sponsored by Rep. Raul Labrador, R-Idaho, in the House (H.R. 3133) with more than 100 co-sponsors of both parties and sponsored by Sen. Mike Lee, R – Utah, in the Senate (S. 1808) with 17 co-sponsors—would prevent the federal government from taking such adverse actions. Protecting religious liberty and the rights of conscience fosters a more diverse civil sphere. Indeed, tolerance is essential to promoting peaceful coexistence even amid disagreement.

For more on this see: