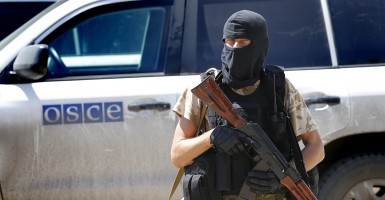 Secretary of State John Kerry confirmed today that pro-Russian separatists were involved in Thursday’s attack on a Malaysia Airlines plane which left 298 dead and said it is “pretty clear” Russia also had a role in the tragic event.

He told host Candy Crowley on CNN’s “State of the Union”:

Malaysia Airlines Flight 17 was shot down by a surface-to-air missile over Eastern Ukraine, and it was originally unclear who was responsible for the attack.

During his CNN appearance, Kerry said he knows “for certain” that armed personnel carriers, rockets launchers, tanks and artillery were brought into Eastern Ukraine from Russia and given to separatists. He also said Russians trained the separatist militiamen. Kerry said:

Now we have a video showing a launcher moving back through a particular area out into Russia with at least one missing missile on it, so we have enormous input about this, which points fingers.

Since the attack, there have been multiple reports that separatists have taken the bodies of approximately 200 victims who were on board the Malaysia Airlines jet. According to The New York Times, the pro-Russian separatists are limiting access to the crash site.

On Friday, Heritage Foundation’s Peter Brookes appeared on Fox News to discuss what should be done if Russia was involved with the plane crash: