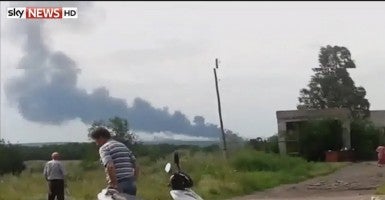 An unverified video grab from the website of Skynews shows smoke billowing from the alleged site of the Malaysian passenger plane crash in Ukraine, July 18, 2014. (Photo: Newscom)

Tragedy has returned to haunt Malaysia Airlines. Commercial flight MH17 reportedly was shot down by a surface-to-air missile over Ukraine, close to the Russian border. Of the 295 people aboard the Boeing 777, none is believed to have survived.

The airliner crashed in the inflamed Donetsk region of Ukraine. Both the Ukrainian government and Russian-backed separatists denied responsibility.

“Regardless of whether the airliner was shot down, or crashed for some other reason,” Kochis explains, “Russian aggression against Ukraine and support for rebel separatists have created the conditions of instability where a tragedy like the one we see today is more likely.”

The Obama a dministration’s failure “to enact serious consequences” for Moscow’s meddling allowed the Kremlin a free hand to sow instability in the region “with deadly and tragic consequences” Kochis adds.

The incident, he says,  “underscores the need for increased resolve among European NATO nations, as well as steps that must be taken by the U.S. and NATO to shore up member states in Eastern Europe.”

The  crash comes amid a civil war that has engulfed Ukraine since February. Pro-Russian separatists have continued offensive operations in the area, shooting down a Ukrainian military transport just last month.

Officials in Kiev quickly decried the incident as a “catastrophe,” Russian President Vladimir Putin offered “his sincerest words of sympathy and support,” and Malaysian President Najib Razak expressed “shock and sorrow,” according to Sky News.