The Moral Difference Between Israel and Hamas 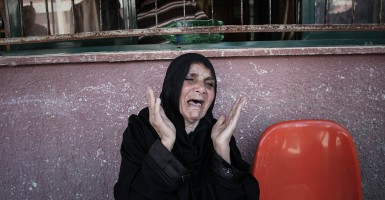 An elderly Palestinian woman grieves the loss of relatives outside a hospital in Khan Yunis in the southern Gaza Strip on July 16, 2014. (Photo: Ezz Al-Zanoon/APA Images/ZUMA Wire)

What most Americans—and the world—hear about the ongoing conflict between Israel and Hamas goes something like this: “125 Palestinians, most of them civilians, have been killed by Israel’s relentless assault on Gaza. No Israelis have yet been killed.” This may be true, but there is absolutely no context to it. One must look at the methodologies of the two sides.

Hamas sets up rocket launchers—as well as supply dumps and command-and-control sites—in the midst of apartment buildings, mosques and schools. From these sites, its fighters launch dozens of rockets in salvos, targeting population centers with no discrimination at all. They have been firing almost continuously of late. But normally, they fire when Israeli school children move from their homes, which have safe shelters, to their schools, which also have shelters. They do this deliberately to try and catch the kids in the open. They don’t seek to minimize collateral damage – they seek to maximize it.

Israel, on the other hand, fires only at specific, intelligence-derived military targets. Since these targets are deliberately intermixed with the civilian population by Hamas, Israel must take steps to minimize the collateral casualties.

Before the Israelis strike a building, every home in it gets a call on its landline phone, as do all the cell phones associated with the inhabitants of the building—the cells additionally get text messages—telling them that in a few minutes the building will be targeted. Finally, to make sure everyone gets the message, Israel drops a dud bomb—one containing no explosives—onto the roof of the structure. Minutes later, the building is destroyed. There is no instance in modern military history where a force has taken greater measures to give the innocents as much chance to get out of the way. It is as “discriminant” as a modern military can be.

Additionally, Israel has developed its much-touted—and rightly so—Iron Dome rocket defense system, which renders most of Hamas’ efforts of no effect. Between the Iron Dome shooting down the rockets that might otherwise do damage, and the “Red Alert” app that alerts civilians on their cell phones in real time when a terrorist rocket attack is launched, and where it is headed, the civilian casualties in Israel have been negligible.

Israel just wants to be left alone; Hamas wants the destruction of Israel. There is no moral equivalence there, and the tactics of the two sides prove the point.