Hundreds of Undocumented Children Could Be Coming to Wisconsin 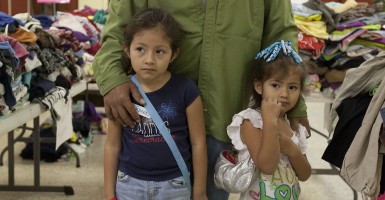 Two Salvadoran children, ages 5 and 9, at the Catholic Charities center in Mcallen, Texas. New reports say hundreds of undocumented children may be headed from the Mexican border to Wisconsin. (Photo: Xinhua/Marcus DiPaola)

MADISON, Wis. — Hundreds of undocumented children may be headed from the Mexican border to Wisconsin.

The federal government has asked officials in the Madison and Milwaukee areas to look for potential sites to house some of the children now flooding into the country from Central America through Mexico.

Madison Mayor Paul Soglin told Wisconsin Reporter Monday the city is working with several organizations, including Centro Hispano of Dane County, to find a facility of at least 90,000 square feet to shelter between 150 and 250 unaccompanied child immigrants.

Soglin said the federal government is hoping to have a self-contained structure ready in the Madison area as soon as possible. But he said his office has not identified any public or private buildings that meet the criteria.

The Rev. David Bergner, director of the Milwaukee chapter of Catholic Charities, told Wisconsin Reporter Monday the federal government is seeking room for up to 300 children.

Catholic Charities has found three potential sites in the Milwaukee area, and now it’s up to FEMA to make the next decision, Bergner said.

Bergner said his agency will know more once a final decision is made on President Barack Obama’s request for $3.7 billion in emergency aid for child migrants.

The costs associated with the temporary stays, which are unknown at this point, would be covered by the federal government, Soglin and Bergner said. The staffing of the facilities would fall to the Office of Refugee Resettlement, Bergner said.

The sites would house the children for about 120 days, Bergner said.

“That was the goal set to get them processed,” he said.

The Obama administration estimates it will capture close to 90,000 minors trying to illegally cross the Mexican border without their parents by the end of the current budget year in September.

The government returned fewer than 2,000 undocumented children last year to their native countries.