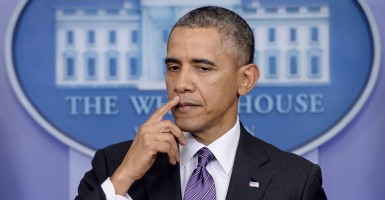 One of the biggest contributors to the nation’s spending crisis is federal spending on government health care programs, according to the Congressional Budget Office’s Long Term Budget and Economic Outlook projections released this week. And Obamacare only exacerbates that problem.

Here are the main takeaways:

Health spending is projected to surpass all other government programs. Federal spending on Medicare, Medicaid, the Children’s Health Insurance Program (CHIP), and exchange subsidies will grow from 4.8 percent of gross domestic product (GDP) in 2014 to 8 percent of GDP 25 years from now, exceeding all other categories of spending.

Obamacare’s new spending is the biggest factor contributing to federal health spending growth over the next decade.Obamacare’s exchange subsidies and Medicaid expansion are projected to account for 62 percent of the increase in health care spending through 2024. This means Obamacare’s spending accounts for more than even the aging population and excess health care cost growth. In addition, the CBO projects that about 20 percent of federal spending on major health care programs in 2024 would finance care for nonelderly able-bodied people. Medicare spending is unsustainable. The CBO report projects that net Medicare spending will be 4.6 percent of gross domestic product (GDP) in 2039. But CBO has to base its projections on current law which includes a 24 percent cut in Medicare physician payments next year and Obamacare’s over $700 billion worth of Medicare payment reductions over the next decade—both of which, if kept in place, would have a severely negative impact on seniors’ ability to access care. Thus, the problem is even greater than portrayed in CBO’s projections.

Filling the Medicare spending gap is only getting worse. The Hospital Insurance (HI) trust fund that finances benefits under Medicare Part A and is funded with the Medicare payroll tax, has been spending more money than it takes in since 2008. The CBO estimates that the gap between revenue and spending is .8 percent over the next 25 years, and worsening in the future. According to the CBO,

Eliminating a gap of that size would require an immediate and permanent increase in HI payroll taxes from 2.9 percent to 3.7 percent [about a 28 percent increase] of taxable payroll as currently projected, an immediate and permanent cut in spending on Part A equal to about one-fifth of current spending, or some combination of tax increases and spending cuts with an equal present value.

This CBO report illustrates the gravity of the Medicare fiscal situation. But there is a reform option that would put the Medicare program on a sustainable path. In a separate report, the CBO has estimated that the structural reform premium support (a defined-contribution system of health-plan financing), where seniors are able to choose a private plan to receive their Medicare benefits, using a set amount of money from the government to offset their premium costs,would save both seniors and taxpayers money, ensuring that current seniors and future generations of seniors are able to access medical services.

If the U.S. is to get its fiscal house in order, health care spending must be reduced through market-based reforms. That is the exact opposite of what Obamacare has done.