On the Border, Activist’s Arrest Rattles the ‘Dreamers’ 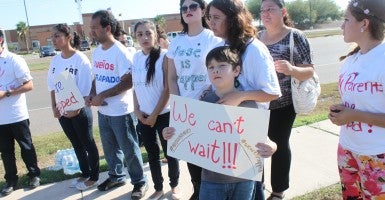 'We are standing in solidarity for one of our own dreamers:' Protesters seeking citizenship for illegal immigrants gather near the Border Patrol station holding one of their leaders. (Photo: Josh Siegel / The Daily Signal)

McALLEN, Texas — Visitors staying at the Wingate by Wyndham hotel in this suddenly notorious border town were awakened by the chants and finger snaps of protesters outside.

Across the avenue, at the local airport, the U.S. Border Patrol had arrested a man who is a symbol of their movement. So the protesters gathered in the empty parking lot of the La Plaza Mall, behind the hotel, to express their support for their detained leader.

As more supporters — many wearing shirts and holding signs emblazoned with his last name — learned of his plight, they got into their cars and trucks to drive five miles to a higher-profile venue. Now, from the other side of the street, they watched the Border Patrol station where agents had taken Jose Antonio Vargas.

Maria Castro, national coordinator of the United We Dream network and organizer of recent protests, warned the group that they too would be arrested if they crossed the street to get closer to Vargas.

Vargas, 33, arrived in America from the Philippines as an illegal immigrant when he was 12. He grew up to become a Pulitzer Prize-winning journalist and activist for winning U.S. citizenship for illegal immigrants like himself.

The Border Patrol arrested Vargas on Monday morning at a checkpoint in the airport before he could board a flight to Houston.

Agents handcuffed the writer-activist and took him for processing to the McAllen station, which has been overwhelmed in recent weeks with tens of thousands of illegal immigrants from Central America who have crossed the border from Mexico into Texas.

Vargas had arrived last week in McAllen, a city of about 130,000 just a few miles north of the border, for a news conference and vigil organized by United We Dream, an advocacy group for youth brought illegally into the country.

In a first-person story last week in Politico, Vargas, who travels with a valid Filipino passport but without a U.S. visa, wrote that he was surprised by the strength of security in McAllen. He suggested he might be detained:

In the last 24 hours I realize that, for an undocumented immigrant like me, getting out of a border town in Texas — by plane or by land — won’t be easy. It might, in fact, be impossible.

His supporters used the publicity of the arrest today not only to protest his detention, but to advance demands for fewer deportations of illegal immigrants already living in the country and for “immigration reform” that President Obama says is coming. Many Americans oppose those plans as “amnesty” for those who stayed here unlawfully while others waited in line.

Supporters of journalist-activist Jose Antonio Vargas gather across the street from the Border Patrol station where he was held. (Photo: Josh Siegel / The Daily Signal)

Ryan Eller, campaign director for Define American, a nonprofit group founded by Vargas, put out a prepared statement. In it, he called on Obama and Homeland Security Secretary Jeh Johnson “to exercise prosecutorial discretion and immediately release Jose Antonio Vargas from Customs and Border Protection custody.”

Asked about Vargas at a White House briefing, press secretary Josh Earnest said he had “no reaction to his detention.”

Federal authorities released Vargas after holding him between seven and eight hours. In a statement, the Department of Homeland Security said he had no prior criminal record and was not considered a threat. He was given notice to appear before an immigration judge.

In his own statement, Vargas said:

I’ve been released by [the] Border Patrol. I want to thank everyone who stands by me and the undocumented immigrants of south Texas and across the country.

Gathered across the street from the Border Patrol station hours before his release, the protesters at first appeared unsure and distracted.

Many, mostly teenagers and young adults, fingered their iPhones.

“We’re kind of a little weak,” one leader told the others.

Their words became stronger after one participant, Eric Aguilar, a Mexican resident of the Rio Grande Valley, stood and spoke.

“We are standing in solidarity for one of our own dreamers,” Aguilar said, adding:

Dreamers are your family. We are exposing what the U.S. had done to the Rio Grande Valley. We are aggravated with the Border Patrol. It’s not fair. We are not criminals. We are fighting for the freedom we deserve. We will take it from their hands.

One teen-age girl wore a shirt reading: “My family is trapped.”

A middle-aged woman, whose 20-something daughter is a U.S citizen, used the stage to out herself as an illegal immigrant for the first time.

They hope they did not spread their message in vain.