The U.S. Must Do Everything Possible to Undermine Hamas 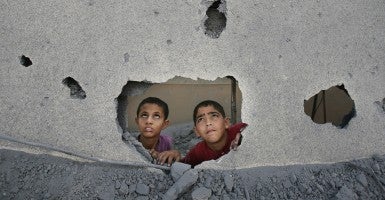 A Palestinian boy inspects the rubble of a destroyed governmental prison after an Israeli air strike in Rafah in the southern Gaza Strip, July 15, 2014. (Photo: Eyad Al Baba/APA Images/ZUMA Wire)

Hamas starts wars it knows it can’t finish. It also knows full well that wars in a very small place put innocents at risk. And Hamas is fine with that.

No matter how this latest round of Palestinian-Israeli retribution ends, it won’t be the last. Long rooted in the Gaza Strip, Hamas will ever rise to the sound of the trumpets. It can do no differently.

Waging wars that can’t be won, fighting battles where your own people are bound to bear the biggest loss, measured in funerals, missing limbs and smoking ruins, it ought to make no sense. But, to Hamas, that way of war makes perfect sense—and always will.

Those seeking to understand the Hamas way of war can gain great insights by reading a book on the Pakistan military. In “Fighting to the End: The Pakistan Army’s Way of War,” Georgetown University Professor C. Christine Fair unpacks the “strategic culture” which drives an endless military competition with India—a contest that logic dictates can never be won.

The Pakistan-India long war, Fair argues, isn’t about the border dispute over Kashmir. In fact, she labels Pakistan a “greedy” state. If India just handed the district over and walked away, the Pakistan Army would still see New Delhi as an existential threat. That’s because Pakistan’s military defines its core purpose as opposing the larger and more powerful state to the south.

Similarly, Hamas defines its raison d’etre as fighting Israeli occupation. That is a worldview without end as long as Israel exists—and even then, one wonders if Hamas would not turn on its Arab neighbors as the next oppressors.

From the Hamas perspective, not fighting is not an option. The struggle is not about winning and losing, it’s what justifies the group’s existence. The casualties, the destruction, the deaths of innocents on both sides, all are secondary in the group’s strategic calculus. At its core, the Hamas strategic culture calls for constant conflict.

India and Pakistan share a subcontinent. Their endless struggle can go on forever, and both states can still—maybe—go about their business.

Palestine is a very different place. Hamas can’t have its wars without outsized human tragedy for the size of the ground that lives under its shadow.

Israel can defend itself. It can punish Hamas. But Israel can no more win its war with Hamas than India could force the Pakistani army to play nice.

Both India and Pakistan have nuclear weapons—a reality that effectively constrains the scope of direct confrontation. Hamas has no nukes. But Israel could not root out Hamas without leveling Gaza and salting the earth. And, Hamas knows that Israel’s humanity will constrain them the way nuclear weapons hold back other states.

The Gaza Wars will continue until the Palestinian people purge themselves of the Hamas regime, throwing off the yoke of corruption, hate and economic repression.

The United States can best help not by brokering another deal, but by doing everything possible to undermine Hamas. This means cutting off its sources of funding and support, attacking its legitimacy, and publicizing its abuses and outrages.

The end of this constant voice for violence is the truest path to peace.