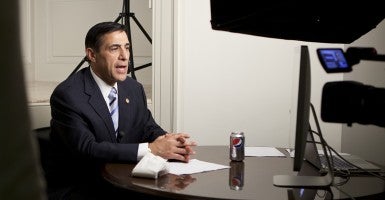 Is “Operation Choke Point” about to get choked by Congress? Rep. Darrell Issa, R-Calif., sure hopes so.

Issa, chairman of the House Oversight and Government Reform Committee, is calling for the dismantling of what he calls a secretive initiative launched by the Obama administration in early 2013.

Critics say that Operation Choke Point, so dubbed by Department of Justice officials under Attorney General Eric Holder,  seeks to weed out businesses from the marketplace that the Obama administration considers objectionable. According to The Wall Street Journal, it was an outgrowth of the Financial Fraud Task Force, established by President Obama’s executive order early in his first term.

The initiative, Issa said last week, is a slippery slope:

“If you empower the government to pick winners and losers within a lawful enterprise, then there is no place to stop.”

Initially, in the wake of the 2008 financial crisis, officials targeted small-dollar, nonbank lenders. But it grew to include other legal, legitimate businesses such as gun dealers and tobacco vendors at Walmart and Bass Pro Shop.

Issa, speaking on Operation Choke Point at Cato Institute, called it “proactive, progressive activity” by government against banks and other legitimate businesses.

“Fraud should be prosecuted,” Norbert Michel, research fellow in financial regulations at The Heritage Foundation, told The Daily Signal. “They don’t have to use the banking system to shut out every single player in an industry to do that.”

One official at Justice, quoted anonymously in a  Wall Street Journal report last summer, said the initiative was intended to change “the structures within the financial system that allow all kinds of fraudulent merchants to operate,” with the intent of “choking them off from the very air they need to survive.”

“When the federal government maintains the discretion to decide which bank gets rescued and which does not, it should be clear that banks in practice have little choice but to cooperate,” Calabria said.

Despite his opposition to the initiative, Issa has yet to endorse legislation to end Operation Choke Point. Instead, he said:

We’ve got to do what baseball pitchers do anytime somebody’s crowding the plate. And that is, we’re going to put the ball close enough that either they’re going to jump back, or we’re going to hit them with the ball. … What they’re doing is wrong, and we’ve got to show that.