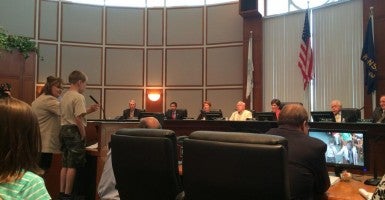 Call it a victory for common sense.

City officials in Leawood, Kan., have reversed course after ordering a 9-year-old boy to tear down the little free library he built in his front yard for Mother’s Day.

Late last Monday night, after Spencer Collins had appeared before the Leawood City Council to advocate for permission to share his love of reading books with his neighbors, the Council unanimously approved a temporary measure that would allow the free little library to stand in his yard.

The Council has proposed a more permanent solution to allow little free libraries in Leawood. It will be taken up in October after a public-comment period.

As we reported earlier, this issue began when the city’s codes enforcement office sent a letter to Spencer and his family warning they would face an official citation if the little library was not removed from their front yard.

The story attracted national attention, and more than 31,000 people expressed support for Spencer on his Facebook page. With media pressure mounting, the city council was forced to address the publicity nightmare it created.

Spencer addressed the city council to explain his position. “I think free little libraries are good for Leawood, and I hope you will change the code,” he said.

Fellow residents joined in. “Reading is a solitary endeavor, but this makes it about the community. It is about neighbors reaching out to neighbors,” said Wyatt Townley, a city resident.

Ultimately, the Council agreed with Spencer and unanimously approved a moratorium that exempts little libraries.

Not everyone was happy, though.

“Why do we pay taxes for libraries and have those boxes on the street?” asked one attendee. Another member claimed the little libraries were eyesores and argued, “You will destroy

Leawood if you destroy our codes and bylaws.”

Fortunately, cooler heads prevailed, and the city is on course to amend the ordinance to permanently allow small libraries in the front yards of Leawood residents. The moratorium approved last Monday is only a temporary solution, but it is a step in the right direction.

Ray Bradbury famously stated, “There are worse crimes than burning books. One of them is not reading them.” For those interested in encouraging literacy and spreading the joy of reading, this was a victory.