Q & A: What Is This Iron Dome That Is Protecting Israel From Hamas Rockets? 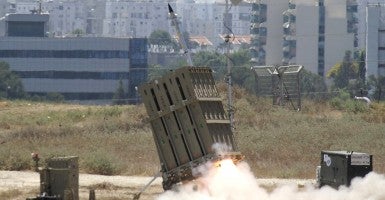 A missile is launched by an 'Iron Dome' battery on July 11, 2014 in the southern Israeli city of Ashdod. Three Gaza rockets were shot down over the Tel Aviv area as Hamas militants claimed they had fired M75 missiles at the Israeli city's airport. (Photo: AFP Photo/David Buimovitch/Newscom)

As Hamas launches rockets from the Gaza Strip into Israel, casualties are kept at a minimum thanks to Israel’s superior air defense system.  In the current conflict, up to 90 percent of the rockets engaged by the “Iron Dome” are intercepted as they approach high-value Israeli targets. The Rafael-Raytheon air defense system has held a high rate of success since it first intercepted a Gaza rocket in April 2011. What is the Iron Dome and how does it operate?  Heritage policy analyst Michaela Dodge answers these questions and more.

What is the Iron Dome?

The Iron Dome is an Israeli air defense and a short-range defense system designed to destroy enemy rockets, mortars, and artillery shells.

>>> The U.S. Must Do Everything Possible to Undermine Hamas

How does it work?

Each Iron Dome battery is comprised of interceptors (Tamir), radars, and command and control systems. The system shoots down incoming rockets mid-air before they hit the target. The system only intercepts rockets that would hit targets of value (population centers, military facilities, etc.). This allows the system to preserve interceptors and save more resources than if it were shooting down every single rocket. In April 2011, the Israelis found out that they needed to launch an interceptor against only about 20 percent of the rockets launched by Hamas.

How often is it activated?

This depends on the threat level. The Iron Dome is deployed close to population centers. It is mobile so it can be deployed to different parts of the country depending on where the threat is coming from. Once radars get information about incoming rockets, the interceptors are fired in a manner that increases the probability of the intercept.

Since it’s a short-range air defense system, what type of capabilities does the IDF have for countering long- and medium-range threats?

What role did the US play in developing the system?

The U.S. is contributing funds toward developing the Iron Dome system. In the fiscal year 2014, the Department of Defense requested more than $220 million to fund the system. Raytheon, U.S. defense contractor, is under contract for co-producing the system’s components and interceptors.

How effective is it? What percentage/number of incoming rockets has it intercepted?

In the current conflict, the Iron Dome has intercepted up to 90 percent of rockets that it engages. Note that it does not engage every single rocket, but only the ones that would actually target valued areas.

What other countries have the Iron Dome technology?

Can you briefly address the criticisms of the system?

Critics have argued that the Iron Dome is too expensive, since limited numbers of interceptors (about $60 000 apiece) are fielded against large numbers of cheaper offensive rockets (about $500 to $1,000 apiece). These critics miss the point. What matters is the value of defended area and what would costs of a successful attack. The damage in blood and treasure caused by a successful attack could be much larger than a cost of an interceptor.

Critics also argue that the system does not work based on a “visual analysis” of rockets’ contrails. This argument simply does not stand. Blurry videos from cameras and smartphones are not sufficient to make a judgment whether a threat was destroyed or not. The IDF uses different types of radars to confirm intercepts.

There are other significant benefits that the critics of the system often omit from their analysis. Until the deployment of the Iron Dome system, the Israelis faced a stark choice: They could absorb the attacks or escalate the conflict by conducting retaliatory offensive operations against their enemies. Escalation, for justifiable reasons, is what the Israelis chose to do both against Hezbollah in 2006 and against Hamas periodically. To the extent the Israelis used these retaliatory strikes in attempts to destroy enemy rocket launchers—itself a fundamentally defensive purpose—they found the offensive counterstrikes themselves to have limited effectiveness and cost effectiveness. The Iron Dome system provides the Israeli leadership with the political, policy, and military options as well as the space and the time to make the right decision in order to prevent an escalation.

The use of the Iron Dome system permits Israel to draw an even clearer distinction between itself and its enemies as to which side is the aggressor (not that there should be much doubt by anyone making an honest assessment). Nevertheless, there is considerable, albeit intangible, value in depriving an enemy of plausible arguments against an effective defensive military system. For Hamas and Hezbollah to argue against Iron Dome, they will have to assert that Israeli use of this defensive system is an aggressive measure. The argument is implausible.