How U.S. Taxpayers Subsidize Fossil Fuels in Russia, Saudi Arabia While Being Penalized at Home 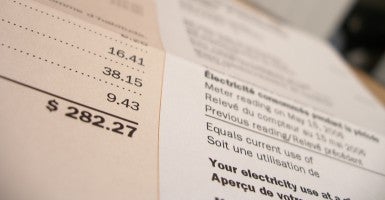 "Our electricity rates will increase as we pay countries to burn what we no longer can," Americans for Tax Reform warns of a disconnect between domestic policy and Export-Import Bank loan practices. (Photo: Brendan Wood)

Americans have to pay more for electricity and compete for fewer jobs because of President Obama’s regulatory curbs on fossil fuels at home, even as their tax dollars support expansion of those same energy sources abroad.

The Obama administration last month rolled out its most recent brake on fossil fuels, a 645-page proposed rule to achieve a 30 percent cut in carbon dioxide emissions from power sources by 2030 compared to 2005 levels.

At the same time, the administration pressed for reauthorization this fall of the U.S. Export-Import Bank, a federal agency that offers billions of taxpayer dollars for development of fossil fuels in Russia, Saudi Arabia, Turkey, Mexico and other countries. In examples The Daily Signal plucked from the Export-Import Bank’s annual reports in the past three years, the federal agency: ‘Political Hypocrisy of a High Order’

When President Obama signed a bill in May 2012 extending the 80-year-old agency’s charter through this Sept. 30, he told an audience of business owners gathered at the White House that the bank would open new avenues for their products overseas:

By reauthorizing support for the Export-Import Bank, we’re helping thousands of businesses sell more of their products and services overseas. And in the process, we’re helping them create jobs here at home. But some of those products and services will go toward developing the same energy sources that in the U.S. are being hit with a regulatory crackdown by the White House. The intent is to eliminate use of traditional energy sources under the rationale of averting “the catastrophic impacts of climate change” described in the president’s “Climate Change Action Plan.”

“This is political hypocrisy of a high order,” says Katz, a regulatory policy analyst at Heritage who has written extensively about the Ex-Im Bank:

The Obama administration effectively is imposing a hefty energy tax on Americans at the very same time it is subsidizing fossil-fuel projects in foreign countries. Both are lousy policy.

The $5 billion in direct loans for Saudi Arabia’s state-owned oil company last week drew the distinction of being named “Egregious Ex-Im Bank Deal of the Day” by the House Financial Services Committee.

Rep. Jeb Hensarling, R-Texas, the committee’s chairman, is the leader of a push by conservative lawmakers to deprive Ex-Im of reauthorization when its charter expires Sept. 30. The Heritage Foundation’s lobbying arm, Heritage Action for America, is part of a coalition organized by Americans for Prosperity to argue that Ex-Im’s time is past.

The Daily Signal invited Ex-Im officials to respond to critics for this report and to account for its support in foreign countries of the same kind of fossil-fuel development that the Obama administration restrains in the United States.  Despite repeated phone calls and emails, the bank declined to comment.

President Franklin Roosevelt created what was then the Export-Import Bank of Washington through an executive order in February 1934.  The idea, according to the order, was to “remove obstacles to the free flow of interstate and foreign commerce,” and to boost job creation in the U.S.

Two of today’s biggest supporters of preserving Ex-Im, the U.S. Chamber of Commerce and the National Association of Manufacturers, continue to sound these themes – even while expressing concern about the effect of administration policy on domestic jobs and energy prices. However, critics argue, the bank’s subsidies long have distorted the allocation of labor and capital by imposing political calculations in place of economic decisions.

>>> Commentary: What Obama Has Wrong on Climate Change

Under rules proposed by the Environmental Protection Agency, states and power companies must reduce emissions of carbon dioxide by a whopping 30 percent. States must obtain EPA approval of implementation plans that will impose higher energy costs on American families and businesses. The agency’s “flexible” options include expanding renewable energy sources such as wind and solar, implementing energy-efficiency mandates and regulations, and switching from coal to natural gas.

As noted by Heritage Foundation economist Nick Loris, who researches energy and environmental issues, the costs would reverberate across the economy. The phase-out of coal between 2015 and 2023 alone would eliminate 600,000 jobs, computer models show, and the annual income of a family of four would drop more than $1,200 a year.

The U.S. Chamber of Commerce, although a major backer of the Ex-Im Bank, has been a critic of the domestic energy policies to which the bank isn’t bound. A chamber report said the EPA rules would mean $290 billion more in electricity bills by 2030:

Higher electricity prices [will] ripple through the economy and reduce discretionary income, which affects consumer behavior, forcing them to delay or forego some purchases or lower their household savings rates.

Ex-Im’s  FY 2013 Annual Report shows the bank was not hesitant to offer support for cheap, affordable energy products that the Obama administration is working to restrict in the U.S.

President Obama signs the reauthorization of the Export-Import Bank in 2012. (Photo: Newscom)

Since 2001, Ex–Im has provided $14.8 billion in financial commitments for oil and gas exploration, field development, pipelines, distribution, and refining. A fact sheet from Ex-Im trumpets:  “United States equipment and services for the petroleum industry are sought after by the world’s leading companies because of their quality and reliability.”

The bank’s annual report for 2011 noted that it had:

>>> Commentary: Why We Must Get Rid of the Export-Import Bank

However, back home, the administration’s package of EPA rules aimed at staunching global warming or climate change is just the latest in a series of costly regulations aimed at curtailing use of fossil fuels  in the United States, Katz and other policy analysts familiar with the changes say.

Alpha Natural Resources, for example, announced it will shut down eight coal mines and eliminate 1,200 jobs as a result of what the company’s CEO called “a regulatory environment that’s aggressively aimed at constraining the use of coal.” Citing environmental concerns, the White House persists in delaying construction of the Keystone XL Pipeline, which would transport oil from Canada to refineries in south Texas. The administration effectively has banned offshore drilling for the next seven years.

Data compiled by the Western Energy Alliance shows federal leasing for oil and gas exploration on land has dried up as well. The end result of the Obama administration’s energy policies at home and abroad is a “lose-lose” for taxpayers, Chris Prandoni, director of energy and environment policy at Americans for Tax Reform, told The Daily Signal. Prandoni says:

While President Obama’s EPA was writing regulations that forced 300 American coal-fired power plants to close down, his Export-Import Bank conceded the importance of coal by financing overseas coal development. This lose-lose for the American taxpayer is particularly painful: Our electricity rates will increase as we pay countries to burn what we no longer can.

The administration continues to build its case for new regulations around the “politically fashionable” concept of human-induced global warming, but that theory remains “scientifically unproven,” says Bonner Cohen, senior fellow with the National Center for Public Policy Research.  This “war on coal,” he said, “is part of a larger war on affordable energy.”

The policy research center compiled a list of the Top 10 Reasons Washington Should Not Impose New Global Warming Laws or Regulations.  Figuring prominently on the list is the disparity between climate models and actual scientific observations that show there has been no appreciable global warming since the Clinton administration.

“Under the guise of combating ‘climate change,’ the administration practices crony capitalism and allocates ever-more regulatory power onto itself,” Cohen says, adding:

But when it comes to the Ex-Im Bank, it provides taxpayer-backed loans to foreign customers of well-heeled U.S. behemoths, such as Boeing, Caterpillar, and General Electric.  And its allegiance to Washington’s powerful administrative agencies leads it to turn a blind eye to the Ex-Im Bank’s sweetheart loans, even if they finance fossil-fuel-related projects the administration would have the world believe endanger the planet.