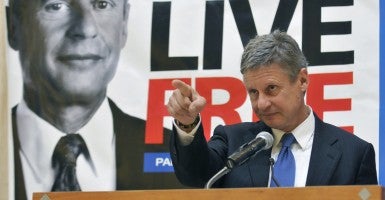 “Imagine life without having to deal with the IRS,” Johnson told New Mexico Watchdog in an interview just two days after Americans learned former IRS official Lois Lerner warned colleagues to be careful about what they write in emails amid congressional inquiries.

“None of it surprises me,” Johnson said. “To a higher degree or a lesser degree this is what happens when you have bureaucrats in charge that can manipulate the system any way they so choose.”

A federal judge on Thursday ordered IRS officials to explain under oath how Lerner’s emails disappeared and how they might be recovered.

“Come on, loss of emails? Give me a break,” Johnson said. “If that doesn’t outrage anybody who looks at this, then you’re out to lunch.”

Johnson’s call to abolish the agency dates back to 2009, after he met with a number of economists, including Jeffrey Miron, director of Undergraduate Studies in the Department of Economics at Harvard, who became an adviser to Johnson’s 2012 campaign.

But how would that work?

Instead of collecting taxes from various sources, a consumption tax is collected when people spend money on any item or service. By eliminating income tax, sales tax and others, the idea is that overall prices would not go up and may, according to its advocates, actually decrease the overall tax burden on citizens.

Johnson called Fair Tax legislation, which he said is supported by about 80 members of Congress, “a great starting point for a debate and discussion over a national consumption tax.”

Critics say a consumption tax benefits higher-income people people who have more in savings at the expense of those with lower incomes. Moreover, they say, without tax incentives and structures to save for retirement, “you could actually end up with less retirement savings and possibly even less savings overall,”  Len Burman, a senior fellow at the left-of-center Urban Institute, said in a 2005 interview with PBS.

But Johnson said the advantages outweigh the disadvantages.

“Why would any company anywhere in the world locate anywhere but the United States, given zero corporate tax?” Johnson said. “The entire world will change their tax structure to emulate no income tax, no corporate tax, no more filing.”

Would it ever happen? After all, the current tax system is laden with incentives and tax breaks, such as deductions for charities.

“I believe it will take place because at some point all these smart people will actually get with it,” said Johnson, who has a page devoted to tax reform at the website for the Our America Initiative, a political advocacy committee he founded.

Johnson made headlines last week for becoming the president and chief executive officer of Cannabis Sativa Inc., a small company based out of Nevada that sells lozenges made from oils extracted from marijuana plants.

In 1999, Johnson became the first governor in any state to call for the legalization of marijuana and said he remains the only sitting governor to do so.