The Supreme Court Vs. Eric Holder 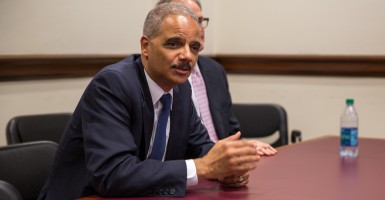 If Eric Holder were a baseball player, he’d have been benched long ago — if not kicked off the team. His batting average before the Supreme Court is abysmal, losing again and again in his efforts to undermine the Constitution.

First was Burwell v. Hobby Lobby, in which the Supremes tossed out ObamaCare’s contraceptive abortion mandate and upheld the First Amendment rights of several family-owned businesses to make their living in conformance with their religious beliefs.

Although the government was not party to another case, Harris v. Quinn, the Justice Department filed an amicus brief on the side of Illinois and the SEIU, arguing that unwilling home health-care workers could be forced into unions (and made to pay compulsory dues) simply because their services are paid for through Medicaid.

On June 26, in National Labor Relations Board v. Canning, all nine Justices ruled that President Obama’s “recess” appointments to the NLRB violated the Constitution.

Not only did Obama’s own judicial appointees vote against him (including his former solicitor general), but the majority opinion was written by Stephen Breyer, a liberal stalwart of the Court.

The Administration also lost United State v. Wurie, in which the Holder Justice Department claimed that the police and federal authorities did not need a search warrant to seize all of the information stored in the cellphone of someone who had been arrested.

Once again, the administration lost all nine justices.

The basic invasion of privacy and violation of Fourth Amendment protections against unlawful searches and seizures represented by the administration’s position is in line with its frightening view of governmental power over its citizens.

Canning and Wurie are only the latest losses of the administration in which all nine Supreme Court justices ruled against the government.

In fact, there have been 20 such cases during this administration — and even more if you include cases in which the administration filed an amicus brief, such as in McCullen v. Coakley, the free-speech case that was handed down the same day as the recess appointments case.

The Obama administration filed an amicus brief in that case supporting the Massachusetts law in question and helped argue the case before the Supreme Court.

But all nine justices found the Massachusetts law, which created a 35-foot “buffer” zone around abortion clinics, violated the First Amendment by restricting speech in public areas “that have historically been open to the public for speech activities.”

It is no surprise that the administration supported a law that restricted the voice of pro-life supporters.

That is in accord with its general attack on the political speech and activities of disfavored conservative advocacy organizations through the IRS and other government agencies. The positions taken by this administration in the other 9-to-0 cases are just as overbroad.

In 2012’s Hosanna-Tabor Evangelical Lutheran Church & School v. EEOC, DOJ displayed an open hostility to religious freedom by claiming that the federal government had the right, as the Supreme Court termed it, to “interfere” in a church’s employment decisions on the hiring and firing of its ministers and religious teachers.

The Supreme Court was clearly astounded at the arguments being made by the Justice Department and unanimously rejected it.

In Sackett v. EPA, the administration tried to prevent a family from defending itself in court and contesting a punitive order from EPA bureaucrats imposing a fine of $75,000 a day for trying to develop a lot in a residential neighborhood which the EPA considered a wetland. The administration lost.

In US v. Jones, just like in the Riley/Wurie cases, the administration claimed that law enforcement could attach a GPS device to your car without a warrant or even any suspicion of criminal activity.

The Court unanimously rejected this position and, in a concurring opinion, Justice Sonia Sotomayor said the administration was trying to invade “privacy interests long afforded, and undoubtedly entitled to, Fourth Amendment protection.”

Typically, the Justice Department does very well before the Supreme Court. Holder has made that a losing record.

That’s because, as legal scholar Ilya Shapiro says, the administration has “relied on outlandish legal theories that pushed a constitutional interpretation of extreme federal power.”

Thankfully, the Supreme Court has become the last defense for those who still believe in those rights.