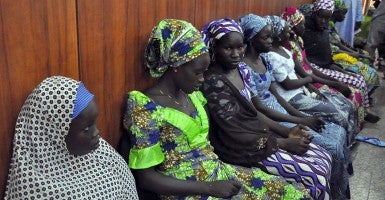 Schoolgirls who escaped from Boko Haram kidnappers in the village of Chibok, sit at the Government house to speak with State Governor Kashim Shettima in Maiduguri on June 2, 2014. (Photo: AFP/Getty/Newscom)

While the #BringBackOurGirls campaign brought international media attention to the plight of more than 250 schoolgirls kidnapped by the terrorist group, Boko Haram, very little progress has yet been made on saving them over the past three months.

Nigeria’s National Council of State is now claiming that they will deliver “some good news” very soon, a mantra that has been sadly repeated without any concrete action. Two of the girls were recently found dead while a few have managed to escape. According to the Nigerian Government’s official report, 219 girls remain missing.

While Nigerian President Goodluck Jonathan was writing his Washington Post op-ed, Boko Haram continued its reign of terror, kidnapping more children and destroying more villages in Nigeria. Thankfully, the more than 60 girls and women abducted on June 22 did manage to escape while their Boko Haram captors who were away attacking a military barracks and police headquarters.

In his June op-ed, Jonathan vowed to rescue the kidnapped girls and stabilize the situation in Nigeria. He voiced his sadness that his recent silence about the investigation may have misled people’s perceptions of his support for the rescue of the girls. Although government reports have spoken of progress on the rescue mission, the girls have yet to be saved and the military’s official investigation is now closed.

While there is no doubt that Nigeria is facing a serious terror threat in the group Boko Haram and rescuing more than 200 girls is challenging and delicate, t Jonathan and his administration, along with the military have not been doing themselves any public affairs favors. The miscommunication and failure to act pitfalls have led many to question how effective are the federal government, the military, and the police in Northern Nigeria? And will the Jonathan administration be able to counter Boko Haram going forward as the group continues to maintain support in the North, attacks targets further south, and builds recruiting pipelines across the Sahel?

On the positive side, Jonathan has been supportive of increasing cooperative intelligence efforts in West Africa, perhaps in the hopes that regional intelligence integration will be the silver bullet that quells Boko Haram’s increasingly violent and constant attacks in the area. West African countries recently gathered and agreed to establish an External Intelligence Response Unit. This unit is intended to establish coordination between countries on counter-terrorism intelligence.

Meanwhile, Boko Haram has continued its two-pronged strategy of targeting urban areas with bombs while engaging in scorched-earth attacks on villages in northeastern villages. Last week, the explosion of a car bomb that killed dozens in Maiduguri, the birthplace of Boko Haram extremists, was also attributed to the terrorist group. Other recent attacks by Boko Haram have included an attack on a shopping mall in Abuja that killed 24 people, an attack on a medical college in Kano city that killed eight people, and unconfirmed attack in Lagos. As the security situation deteriorates, the Nigerian security forces seem unable to curb, let alone stop the violence perpetuated by Boko Haram.

Conditions in northeastern villages are even worse. Last week, militants targeted three villages. The attacks led to the death of dozens of villagers, including some villagers who were worshipping at church during the attack. Since the beginning of the uprising in 2009, Boko Haram’s goal of establishing an independent Islamic state in northern Nigeria has caused thousands of casualties.

The violence has actually escalated in the past months, resulting in hundreds more casualties. While there has been a greater increase in regional coordination to counter group that has been facilitated by France and the U.K., the Jonathan administration needs a focused long-term strategy that integrates regional partners and builds confidence in the Nigerian people that the administration is up to the task of securing the North, protecting the Nigerian people, and developing an environment conducive to economic growth. Until then, outside help whether from the U.S. or other Western partners will be limited to only short term results.