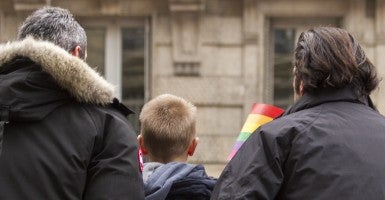 There’s been no shortage of media coverage of a new study that purportedly shows that children raised by same-sex partners fare better than other children.

“Children of same-sex couples are happier and healthier than peers, research shows,” was the headline of a Washington Post story. “Largest-ever study of same-sex couples’ kids finds they’re better off than other children,” proclaimed Vox, while NBCNews.com announced, “Children of Same-Sex Parents Are Healthier: Study.”

But the actual study is a little more, well, complicated.

In an article published on Public Discourse, University of Texas at Austin professor Mark Regnerus takes issue with the study’s method.

The study, conducted by researchers at the University of Melbourne in Australia, found that “children in same-sex families scored better on a number of key measures of physical health and social well-being than kids from the general population,” according to an article written by one of the researchers on The Conversation.

But the sample surveyed in the study chose to participate. The Melbourne researchers didn’t randomly select the first 500 same-sex couples they found, after checking for sufficient regional/income/educational diversity. Instead, they advertised the study – and couples found the researchers, not vice versa. Furthermore, the couples then reported on how their children were – and no outside party fact-checked those results, or evaluated the children independently.

Talking about the couples who participated in the study, Regnerus sounds this note of caution:

[P]articipants—parents reporting about their children’s lives—are all well aware of the political import of the study topic, and an unknown number of them certainly signed up for that very reason. As a result, it seems unwise to trust their self-reports, given the high risk of “social desirability bias,” or the tendency to portray oneself (or here, one’s children) as better than they actually are.

Ultimately, Regnerus argues, this study’s methodology is so problematic the results aren’t worth taking seriously. He concludes:

Until social scientists decide to do the difficult, expensive work of locating same-sex attracted parents (however defined) through random, population-based sampling strategies—preferably ones that do not “give away” the primary research question(s) up front, as [this study] did—we simply cannot know whether claims like “no differences” or “happier and healthier than” are true, valid, and on target.

It should come as no surprise the news media trumpeted a study with these findings. Unfortunately for readers, flawed reporting on a flawed study does a disservice to everyone.