Harry Reid on Hobby Lobby Decision: ‘We’re Going to Do Something’ 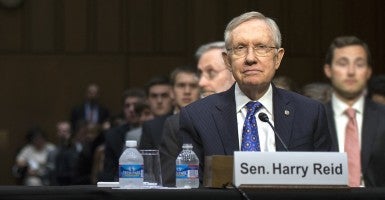 On Monday, Senate Majority Leader Harry Reid, D-Nev., laid out the Senate’s legislative agenda for the “coming weeks.” Listed among his top priorities was legislation to “correct” the Hobby Lobby decision.

Since the Supreme Court’s ruling in June, congressional Democrats have vowed to protect employer-sponsored insurance coverage of contraception and abortion-inducing drugs mandated by the Department of Health and Human Services.

“We’re going to do something about the Hobby Lobby legislation we need to correct,” said Reid.

“In the coming days I will work with my colleagues and the administration to protect this access, regardless of who signs your paycheck,” said Murray in a statement released shortly after the Hobby Lobby ruling.

Sarah Torre, a policy analyst at The Heritage Foundation, argued there were other means by which the government could provide access to contraception and abortion-inducing drugs without relying on employer-sponsored health care coverage.

“There are plenty of other ways for the government to provide these drugs and devices to women who wanted them without forcing family businesses to violate their conscience,” said Torre.

“Americans do not give up their religious freedom simply because they go into business to provide for themselves, their families, and employees,” Torre added. “The Supreme Court recognized that by ruling against the Obama Administration’s unfair and coercive rule.”

Justice Samuel Alito argued in the court’s opinion that the HHS had the means to provide the disputed contraception without forcing employers to ignore their religious convictions, writing:

“HHS has not shown that it lacks other means of achieving its desired goal without imposing a substantial burden on the exercise of religion. The Government could, e.g., assume the cost of providing the four contraceptives to women unable to obtain coverage due to their employers’ religious objections.”

Currently, Democrats are weighing legislative options. Durbin said last week that he would introduce legislation which would force businesses to notify employees and job applicants of its contraception coverage.