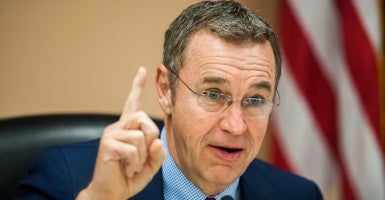 Legislation proposed by an Arizona congressman would give federal officials authority to quickly screen and deport unaccompanied children from Central America who have crossed the Mexican border into the United States.

The bill from Rep. Matt Salmon, R-Ariz., would change a provision in a 2008 human-trafficking law that requires U.S. Border Patrol agents to turn over the children to the federal Department of Health and Human Services and guarantees those minors hearings in immigration court — a process that can take years.

Salmon, chairman of the House Foreign Affairs subcommittee on the Western Hemisphere, is part of a group assembled by Speaker John Boehner to address the border crisis.

“This is an issue he has been working to address for awhile,” said Tristan Daedalus, Salmon’s communications director, adding:

Basically, the crux of the bill is a small legal change that would give CBP [Customs and Border Patrol] agents the authority to immediately repatriate them back to their countries.

The bill addresses a request President Obama made to Congress last week. In asking for $2 billion to respond to the border crisis, Obama urged lawmakers to revise the 2008 law, the William Wilberforce Trafficking Victims Protection Reauthorization Act, to allow for accelerated deportations.

More than 52,000 unaccompanied children and 39,000 women with children have been apprehended at the South Texas border so far this year.

Border officials told The Daily Signal that three of every four people crossing the Texas-Mexico border are from countries other than Mexico.

Under current law, children who originate in Mexico or Canada may be returned immediately if they don’t pass an initial screening interview by a Border Patrol agent, who determines whether a “credible fear” exists.

Under the Salmon bill, the same process would apply to Central American children.

James Jay Carafano, a homeland security expert who is vice president for foreign and defense policy at The Heritage Foundation, said his analysis would depend on what the legislation actually says.

When a bill is introduced, the question becomes will the White House and others in Congress deal with it in good faith, or try to load it up with other immigration issues that aren’t related to dealing with the immediate crisis?

Obama’s proposal to change the 2008 law already has come under fire from child welfare advocates on the left.

“How can we expect a child without parent or legal guardian to share their often traumatic experiences with a complete stranger under these circumstances?” said Wendy Young, president of Kids in Need of Defense. “And will these children have representation by a pro bono lawyer?” She added:

Without an attorney with the time and resources to help children make their cases, any claims of U.S. protection of these children is a farce. The administration is caving in to political pressure before it even attempts to do the right thing by these children.