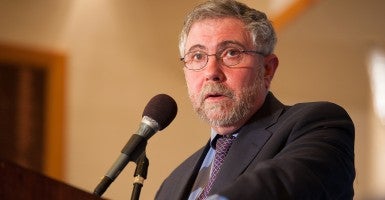 Paul Krugman of the New York Times took a shot at economist Arthur Laffer and others who advise governors around the country to cut taxes to boost economic growth and jobs, calling us “charlatans and cranks” (“ Kansas shows enduring power of bad ideas,” July 1 Opinion).

Krugman said it went awry in Kansas, where Republican Gov. Sam Brownback is phasing down the top tax rate from 6 to 3.9 percent and where he eliminated the tax on small-business income. According to Krugman, “Kansas isn’t booming. In fact, its economy is lagging.” Kansas shows that “tax cuts don’t have magical powers,” he concluded.

Well, it’s true, tax cuts don’t have magical powers, and it is an often-repeated caricature by the left that Laffer and I and others believe that to be true. There are dozens of reasons why some places grow and others lag behind – and taxes is only one of them.

But what is irrefutable from the evidence in the states, not just Kansas, is that strategic tax-rate reductions can ignite growth and employment.

Here is what the national data tell us: Over the past two decades, the nine states without an income tax have had double the population growth and more than double the income growth of states with very high income taxes. These results are statistically significant, which means it is very unlikely they happened by chance.

This does not mean all states that cut taxes have growth or that all states with high taxes don’t have growth. It means there is a strong propensity for low-tax and tax-cutting states to grow. Period.

This is a problem for the left because places such as New York, Massachusetts, Illinois and California that have been following Krugman’s (and President Obama’s) economic strategy to a tee are getting clobbered by tax-cutting states.

In the 5 year period beginning in December of 2007 (the month the last recession started), no-income-tax Texas gained roughly half-a-million jobs, while California managed to lose approximately the same amount.

When looking at the long-term jobs data (from 1990-May 2014), the two big no-income-tax states of Texas and Florida show job growth up 65 percent and 45 percent respectively.  These figures dwarf both California (up 24 percent) and New York (up only 9 percent). These are just a few examples of a long term, irrefutable trend as explained fully in my co-authored book, the Wealth Of States.  State policy dramatically affects job opportunities.

And despite Illinois raising taxes more than any other state over the last five years, its credit rating is the second lowest of all the states, below that of Kansas!

Low taxes may not be “magical,” but they do seem to make places mighty attractive to millions of Americans who are voting with their feet to call these places home.

As for Kansas, the tax cut has been in effect a mere 18 months – not a lot of time to measure the impact. We will see over the next few years whether growth is revived in a state that people have been fleeing for the past decade. Tax revenues are down, but they are in most states because of reductions in capital gains receipts from 2013.

In Kansas City, the growth has been much faster on the Kansas side of the border than the Missouri side.

For now, there is nothing the matter with Kansas.

Note: This column has been updated to correct an earlier version.