‘We Have Not Forgotten’: Presidents on the Fourth of July 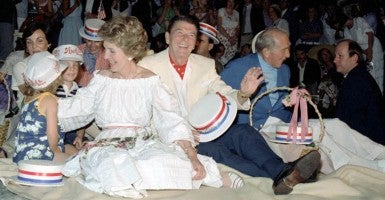 In a letter to his wife Abigail the day before the American colonies publicly justified their independence from Great Britain, John Adams predicted the occasion would be celebrated as “the great anniversary festival” for years to come.

Of the birth of a new nation in July 1776, the future second president of the United States wrote, “the day ought to be solemnized with pomp and parade, with shows, games, sports, guns, bells, bonfires, and illuminations.”

>>> Related: The Declaration of Independence and the American Creed

More than two centuries later, Americans uphold that tradition, celebrating a country built on principles of free enterprise, limited government, and individual and religious freedom. For this Independence Day, here’s a look back at what some presidents had to say in honor of this historic day. “We are called to remember how unlikely it was that our American experiment would succeed.” – President Barack Obama, 2009, at The White House Bill and Hillary Clinton in the parade in Clear Lake, Iowa, on July 4, 2007. (Photo: Steve Pope/EPA)

“From the beginning our people have always known that government could not solve all the problems and that all citizens had to be responsible to build this nation together.” – President Bill Clinton, 1993, steps of Independence Hall in Philadelphia “We have not forgotten that we are one nation under God, and that’s an important thing to point out on July 4th. … The American people really have mountains of faith. And I believe the God who gave us life also gave us liberty.”– President George H. W. Bush, 1992, Legion Park, Faith, N.C. President Reagan and his wife, Nancy, on Inauguration Day 1981.

“There have been revolutions before and since ours. But those revolutions simply exchanged one set of rules for another. Ours was a revolution that changed the very concept of government.” – President Ronald Reagan, 1981, U.S.S. John F. Kennedy in New York Harbor

“[W]e who are gathered at this same hall …  declare now our vow to do our part to lift the weights from the shoulders of all, to join other men and nations in preserving both peace and freedom, and to regard any threat to the peace or freedom of one as a threat to the peace and freedom of all.”  –  President John F. Kennedy, 1962, at Independence Hall in Philadelphia “If my message to you on this Fourth of July could be put into one sentence, it would be this: State the facts of freedom and trust in God, as we have ever done.” –  President Dwight D. Eisenhower, 1959, in national radio broadcast President Roosevelt and his wife, Eleanor, enjoy a bit of relaxation. (Photo: Newscom)

“In 1776 we waged war in behalf of the great principle that government should derive its just powers from the consent of the governed.  … In the century and a half that followed, this cause of human freedom swept across the world.” – President Franklin D. Roosevelt, 1941, at Roosevelt Library in Hyde Park, New York

>>> Resolved: America Ought to Be Free!