We Need More Beyonces and Jay-Zs 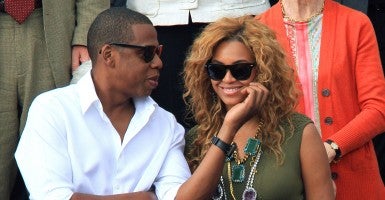 Jay-Z and Beyonce Knowles had their daughter, Blue Ivy, after they married. (Photo: Newscom)

Americans are no stranger to these words from the Declaration of Independence: “We hold these truths to be self-evident, that all men are created equal…” Unfortunately, our efforts to attain equal opportunity pay too little attention to one of the biggest factors threatening opportunity: the breakdown of the family.

Far too many American children–more than 40 percent–enter life without a married father in the home. This hinders the opportunities for those children to succeed and achieve the American dream.

Marriage provides a stable foundation that helps foster a successful future and shields children from poverty. In fact, children born outside of marriage are more than five times as likely to be poor.

Children raised by their married, biological parents are more likely to do well in school, graduate from high school and attend graduate school. They are less likely to go to jail or participate in delinquent behaviors and other behaviors that would harm them, such as alcohol abuse, smoking and illicit drug use, and early sexual activity.

This does not mean children raised outside of marriage are consigned to a life of failure. But research continues to show these children have a more difficult time of it in a variety of ways.

Tragically, there is a growing divide today when it comes to marriage breakdown: Unwed childbearing is much more common in lower-income and working class communities.

Because marital breakdown is occurring most often among those with lower levels of formal education, this leaves children “doubly disadvantaged,” according to University of Virginia professor Brad Wilcox.

They not only miss out on the higher income associated with parents’ higher levels of education, they lack the protective benefits of marriage. The divide along the lines of marriage and education is steadily creating a two-caste society in the United States.

Of course, it isn’t possible for all children to be raised by their married mother and father. But today, more than 40 percent of children are born to single mothers, with the numbers much higher among some groups (nearly 75 percent among African Americans and more than half among Hispanics). Divorce rates also remain high.

Clearly there is room for improvement.

To rebuild a culture of marriage, we need to talk about its importance in struggling communities. Men and women in these communities still have a dream of being in a happy, stable marriage. Achieving that is another story. Many never are told that having a child outside of marriage will hinder them or their child’s future. Telling these young men and young women would be a good start.

Some community and state leaders are making strides to help couples achieve and maintain healthy marriages. Their efforts include getting the message out about the importance of marriage, as well as providing marriage and relationship education. These are great examples, but more are needed.